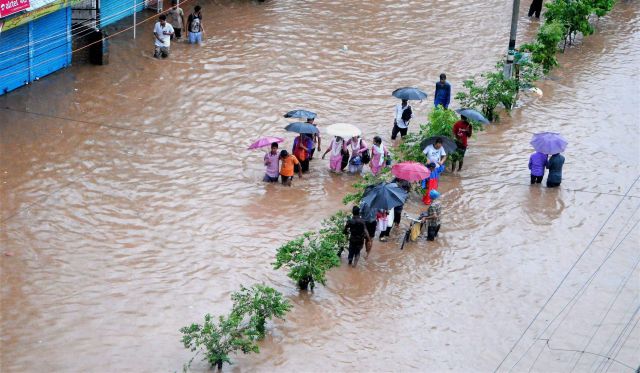 Kolkata : As floods ravage India and its neighbours, experts at IIT-Kharagpur (IIT-Kgp) say states with high forest cover are more likely to better cope with the damage caused.

In a study published in the journal Land Use Policy in July, researchers from the institute examined the impact of forest cover on flood damage in terms of human lives lost and population affected from 1998 to 2011 across all Indian states except Telangana, which came into existance only in 2014.

“The study findings indicate that for a majority of states, the presence of forest cover tends to protect human lives and reduce the adverse consequences of floods significantly,” PhD scholar Kasturi Bhattacharjee of IIT-Kgp’s Department of Humanities and Social Sciences, told IANS.

According to the analysis, the average number of lives lost is quite high in Andhra Pradesh, Assam, Gujarat, Maharashtra, Uttar Pradesh and West Bengal.

The states which have recorded a high number of people affected by floods include Andhra Pradesh, Assam, Chhattisgarh, West Bengal and Uttarakhand.

Bhattacharjee said while for some states (such as West Bengal, Uttarakhand), the damage declined with increasing presence of forest cover during the study period, this did not apply to other states like Madhya Pradesh.

Madhya Pradesh, incidentally, is the state which has recorded the highest average forest cover at 76,294.07 sq. km. (24.75 per cent of its geographical area).

“For Madhya Pradesh, despite increasing forest cover, flood damage has increased. This could be linked to the percentage of forest cover and percentage of flood-prone area in terms of total geographical area of the state as well as the socio-economic parameters contributing to the state’s vulnerability,” Bhattacharjee explained.

The cause of its high magnitude of devastation in floods may be due to the socio-economic backwardness, coupled with low forest cover, Bhattacharjee said.

“This suggests that as the awareness level of people increases, they are better prepared for floods and thereby the damage from floods reduces significantly. Also, it is often found that educated people tend to react faster during flood emergencies compared to their uneducated counterparts,” Bhattacharjee said.

Data for the analysis was culled from the Forest Survey of India (FSI) of the Ministry of Environment, Forests and Climate Change, web portal www.indiastat.com and census reports for 1991, 2001 and 2011.

The findings also have important policy implications for South Asian countries such as Bhutan, Nepal, Pakistan and Bangladesh.

The study warns that if population growth is not controlled in low-lying inundation-prone zones, it is likely that the damage may increase in future, especially in flood-susceptible areas of India as well as other South Asian countries.

“To prevent flood damage, the need of the hour is to shift the focus from flood protection/relief to flood resilience/adaptation, as the majority of structural measures have failed in the past.

“Enhancing flood resilience/adaptive capacity by using non-structural measures such as afforestation drives is a way forward,” the experts note.

Lauding the study for establishing the link in a meaningful way, natural hazards/ecohazards and disaster management scientist Tuhin Ghosh raised questions on the impact on forests themselves.

“While minimising the loss on society, are forests being highly impacted in terms of their coverage, health, soil/water quality and ecosystem services?” Ghosh, Assistant Professor, Department of Oceanographic Studies, Jadavpur University, asked while speaking to IANS.

Further, Ghosh said he is not really convinced that literacy can always indicate the level of awareness.

“My personal experience is that the better-off literate people are not in a position to act properly during a flood situation. In contrast, illiterate rural people know how to manage floods more efficiently,” he added.

(Sahana Ghosh can be contacted at sahana.g@ians.in)