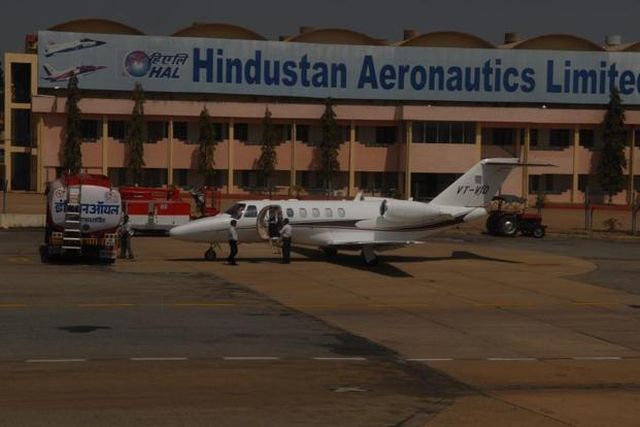 Indias aviation industry traces its roots to December 1940, when industrialist Walchand Hirachand established Hindustan Aircraft Limited (HAL) in Bangalore (now Bengaluru), with American technical assistance and capital and land provided by the Mysore government. Soon after the outbreak of WW II, the Indian government, realising the strategic significance of this enterprise, bought a one-third stake in HAL.

HAL had barely started licensed production when it was nationalised, in 1943, and handed over to the US Army Air Forces (USAAF). Functioning as an Aircraft Maintenance Depot, HAL repaired and serviced hundreds of flying boats, fighters, bombers and transport aircraft for the USAAF during the war. Bangalore, thus, became the hub of aviation industrial support to Allied forces deployed in the SE Asia Command, and produced thousands of aeronautical technicians.

Soon after independence, HAL’s Chief Designer, eminent aeronautical engineer Dr V.M. Ghatage, boldly embarked on three aircraft design projects: Each of them attaining a substantial degree of success. Over the next decade, HAL manufactured more than 400 Ghatage-designed aircraft: The HT-2 basic trainer for the IAF; the Krishak observation aircraft for the Army; and the Pushpak light-aircraft for the civilian sector. Ghatage’s last outstanding achievement was the design of the HJT-16 jet trainer, Kiran, of which 190 were built and are still serving the IAF after nearly three decades.

HAL’s crowning glory, however, came in June 1961 with the flight of the HF-24, Marut, the first jet fighter-bomber designed and built in Asia. The government, in a rare flash of inspiration, had acquired the services of WW II German designer Dr Kurt Tank, in 1956, to help HAL design a jet fighter. An aerodynamically elegant design, the Marut had huge potential as a supersonic fighter, but powered by two, small British Orpheus turbo-jets its performance remained sub-sonic and sub-par.

It is disheartening that having initiated a far-sighted project, both the government and HAL failed to display the zeal necessary to salvage this national endeavour of strategic importance. The IAF, too, remained a mute spectator, as HAL shut the Marut line after delivering just 147 aircraft.

Apart from the Marut, HAL has, since the 1950s, undertaken production of (an estimated) 3,000 aircraft, including the Vampire, MiG-21, MiG-27, Jaguar, Sukhoi-30 and Hawk. The company has also built a few thousand aero-engines. These statistics, however, refer only to “kit-assembly” or “licenced production” and, disappointingly, the HAL management failed to acquire, for its personnel, any aircraft/engine design and production skills. So, when the time came for modernising 125 “HAL-built” MiG-21s, India had to approach Russia and Israel.

This brings us to the well-known saga of the Tejas Light Combat Aircraft (LCA), designed by the Defence Research and Development Organisation’s (DRDO) Aeronautical Development Agency (ADA), and now under production in HAL. A CAG report of 2015 reads: “LCA was required to be inducted into IAF by 1994… the programme was riddled with delays right from the sanction of 1983, and even after three decades, it is yet to be inducted into IAF.” Further, it says: “Though ADA claimed achievement of 70 per cent indigenisation; half of these sub-systems are developed with imported electronic components and accessories.”

The Tejas was notionally inducted into service in 2016, but no lessons had been learnt from the aborted Marut project. Again, all agencies involved — the government, DRDO and HAL — showed a lackadaisical approach, by failing to resolutely address hurdles that cropped up and the prestigious LCA programme languished. As for the IAF, this 2015 CAG comment describes its indifference: “User involvement right from inception is essential for effective and efficient completion of any project. However, active Air HQ participation in the LCA Programme started only in 2006 (23 years after inception).”

A project, complementary to the LCA, taken up by the DRDO, was the development of a turbo-jet engine. Initiated in 1986, irresolute project-management and sporadic development have seen the prototype, named Kaveri, yet to qualify for production 32 years later.

This is clearly a combination of absent political vision and direction, combined with insipid project management that has thwarted most of our aeronautical programmes. We must introspect how, starting from a similar base in the 1950s, the aeronautical industries of China, Brazil, South Korea and Turkey have left India miles behind. More importantly, should we persevere with the same unsuccessful model forever? Not if we take a leaf out of the Indian Navy’s (IN) book.

The navy’s leadership, having persuaded the government in 1960 to embark on indigenous warship building, insisted on taking full “ownership” of naval ship design and construction, as well as management of all shipyards. This has seen a hugely successful programme, delivering warships, ranging from patrol-boats, frigates and destroyers to submarines and aircraft-carriers, to the IN.

The success of the DRDO-funded nuclear submarine project, too, is attributable to the fact that it is staffed by IN personnel and headed by a Vice Admiral, granted powers of Secretary to the government. Two excellent lessons emerge from the navy’s rewarding shipbuilding experience, for application to India’s aeronautical industry.

First, the government must mandate intimate involvement of user Service(s) in every project — from the concept/design stage onwards. It is significant that a few years ago, Army, Navy and Air Force members on the HAL Board of Directors were ejected to make place for Defence Ministry bureaucrats. In the recommended model, the user must commit funds as well as personnel, to the project. Decisions related to project-management, including design and other changes would be taken, expeditiously, in a collegiate fashion by users and designers.

Second, repeated heartbreaks have demonstrated that rapid decision-making and imaginative project-management are not the forte of scientists or bureaucrats. The government must, therefore, bring about a paradigm shift and utilise the huge pool of technical experience and leadership talent available in the armed forces to place suitably qualified officers in the driving seat of projects considered critical for national security.

(The author, a naval aviator, is a former Chief of Naval Staff and Chairman, Chiefs of Staff Committee. The article is in special arrangement with South Asia Monitor)