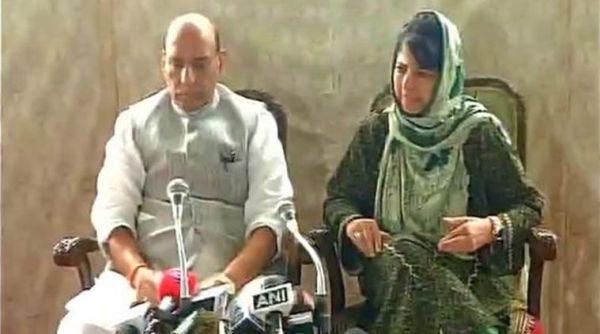 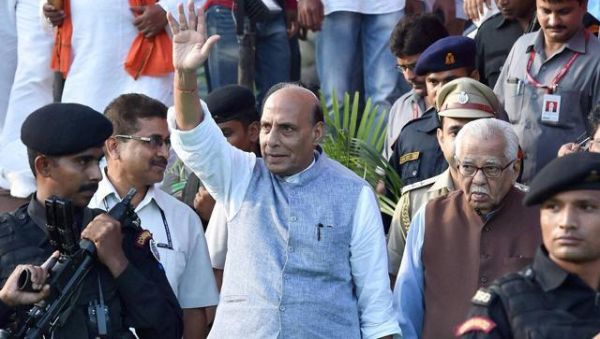 Srinagar, Aug 25 : Union Home Minister Rajnath Singh on Thursday made a passionate appeal for peace in the Kashmir valley, saying India’s future was incomplete without a peaceful Kashmir but it cut no ice with separatists who have been spearheading a protracted violent unrest that has claimed at least 69 lives since July 9.

Announcing that an all-party delegation will visit the state soon for talks, Rajnath Singh also conceded a popular demand to have an alternative “in a few days” to the use of pellet guns as a tool to control unruly mobs.

The Home Minister said that during his stay in Srinagar he met some 300 people, including leaders of all mainstream political parties in the state, with whom he had “good talks”.

“Everybody wants peace to be restored. We are extremely sad over the situation. We are pained over the loss of lives,” the minister said with Chief Minister Mehbooba Mufti by his side.

In an oblique reference to separatist leaders, the Home Minister said people should “not play with the future of Kashmiri youth”.

“They (youth) should hold books, pens and laptops in their hands and not stones,” he said. “We are linking the future of Kashmiri youth with the future of India. And I appeal to Kashmiri people to identify those who are creating trouble.”

India’s future, he said, is intrinsically linked to the future of Kashmir.

He said leaders of all political parties will soon visit here for talks on finding ways to break the logjam in the valley. “I have asked the state government to make all preparations for that.”

Asked if he invited separatist leaders for talks, Rajnath Singh said the government was ready to hold talks with anyone who believed in “insaniyat, jamhooriyat and Kashmiriyat”.

Notably, he didn’t name Pakistan for stoking trouble in the valley and didn’t repeat that talks over Kashmir will only be held under the provisions of the Constitution of India — unlike previously.

Separatist leaders rejected the offer saying the Home Minister’s visit was a futile exercise as long as the government didn’t accept Kashmir as a “dispute” that needs a resolution through talks between India, Pakistan and the people of the state.

Leaders of both factions of the separatist Hurriyat Conference refused further comment on the Minister’s visit.

The opposition Congress said the government needed “to move beyond the rhetoric”.

“Action on the ground is needed. A political dialogue with all stakeholders is suggested,” Congress spokesperson Randeep Singh Surjewala told reporters in Delhi.

It was the Minister’s second visit to the valley in a month since the unrest, the deadliest in six years, erupted after the July 8 killing of Hizbul Mujahideen commander Burhan Wani.

At least 69 civilians have been killed and thousands injured in firing by security forces at pro-freedom demonstrators. Most of the injuries have been caused by pellet guns that have left hundreds partially or fully blinded.

Mehbooba Mufti justified the killings by security forces saying those hit by bullets or pellets had not gone to fetch milk or candies.

She was asked how she justified the alleged disproportionate use of force against Kashmiri protestors when as opposition leader she had criticised the government during a similar unrest in 2010 for civilian killings. The Chief Minister got angry and asked a reporter not to compare the two situations.

“You are wrong. What happened in 2010 had a reason. There was a fake encounter in Machil. Three civilians were killed. Today three militants were killed in an encounter and how is the government to be blamed for that,” she said.

She said people defied curfew and came out on the roads after Wani’s killing.

“Had a kid gone to buy a toffee from an army camp? A 15-year-old boy who attacked a police station (in south Kashmir), had he gone to buy milk,” she asked, adding that only five per cent of Kashmiri population were resorting to violence while the remaining 95 per cent wanted a dialogue to solve the issue peacefully.

The Home Minister earlier met leaders of all mainstream parties and officials of civil, security and intelligence agencies. Trade bodies in Kashmir refused to meet him in protest against the civilian killings.

Meanwhile, the situation in the valley on the 47th day of unrest remained calm but tense amid stiff curfew and shutdown called by separatists.

Sporadic incidents of stone-pelting occurred at six places in Srinagar, Sopore, Kupwara and Bandipora, a police spokesman said. At least a dozen people were injured in these incidents.—IANS