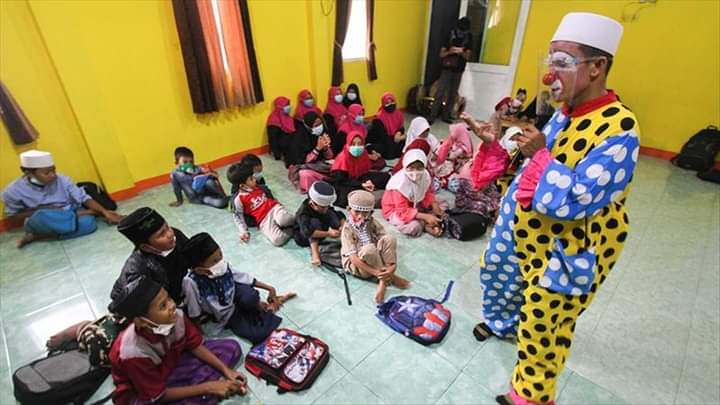 After donning clown garb, Yahya Edward Hendrawan is sitting in front of a mirror, finishing his make-up. He is not going to a party; instead, he is preparing to teach the Quran, the Muslim holy book, to children at an orphanage near his home in Tangerang, the third-largest city in the Greater Jakarta metropolitan area.

He discovered this unique method while teaching the Quran at the Darussalam An-Nur orphanage, where he has been working for the past 13 years.

“It is been 11 years since I started dressing up as a clown and teaching the Quran in a fun way,” said Yahya, 38, who is wearing in an Islamic white hat and a blue and yellow dotted dungaree.

“It just takes me 10 minutes to put on makeup and the clown costume,” he told Anadolu Agency. His five-year-old son Mirza is also busy putting together a clown dress to accompany his father.

“I don’t charge money to teach at the orphanage,” he said. He does, however, supplement his income by working as a party clown at events.

However, making money as a party clown is no longer enough, as the demand for his services has dropped, forcing him to open a small stall and sell snacks made by his wife.

Even amid the COVID-19 pandemic, Yahya managed to gather children while also following health protocols, including wearing a face shield to defend himself and protect others from coronavirus.

“With the clown costume, it becomes easier for me to attract children’s attention,” he added.

When he first started teaching the Quran while dressed as a clown, he faced criticism from his family and neighbors.

“My father said he was embarrassed to see me in a clown outfit, and my wife suggested I find another job,” he explained, adding that they have now accepted his job and support him.

Before starting his lesson, Yahya said, he would playfully greet the students and perform some magic tricks to make the class more interesting. Sometimes, he rewards students who can answer questions about Islam with gifts.

“I usually start my class after distributing these small presents,” he said, adding that he buys puzzles, pencil cases, and notebooks from his own pocket.

Teaching out of compassion

Yahya attributes his motivation to entertain and inspire orphans to study the Quran to his compassion. He felt compelled to make them laugh joyfully, even if only for a brief moment, he added.

“Let them forget the sadness of losing their parents even for just a moment,” he said.

Teaching in a clown costume is proven to be more successful, according to Yahya, who claims that the children become more eager to learn and memorize the lesson faster.

“It was different before I started to wear the costume. The children looked unenthusiastic about learning the Quran, let alone memorized the material I taught,” he added.

After finishing his class, Yahya usually goes around his neighborhood bringing various books to encourage children to read.

The devoted teacher not only distributes the books, but he also reads stories with Islamic themes to the children to boost their morale.

“I want to encourage children to read more books and play less on gadgets,” he said.

Despite the rough journey, Yahya said he is determined to continue teaching and become a person who benefits others.