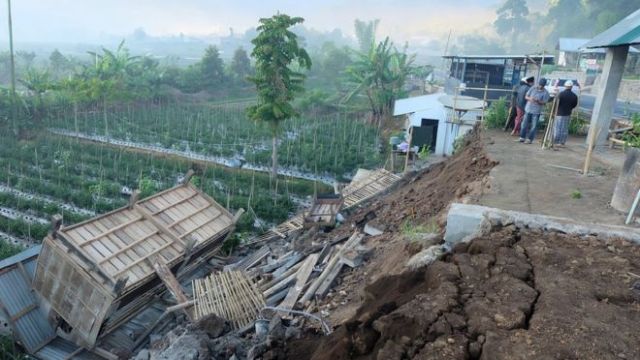 Jakarta : At least 10 people were killed and 40 injured while several buildings have collapsed after a magnitude-6.4 earthquake struck the Indonesian tourist island of Lombok on Sunday morning, officials said.

The quake struck at 6.47 a.m. at a depth of 7 km. Its epicentre was located 50 km north-east of the city of Mataram on the island of Lombok, which has a population of 319,000, the Guardian reported.

The tremors have also affected the neighbouring islands of Sumbawa and Bali.

“We jumped out of our beds to avoid anything falling,” said a tourist who was woken by the quake.

The Meteorology, Climatology and Geophysics Agency (BMKG) reported that in the four hours after the quake, the islands had experienced 66 aftershocks and the earthquake was also felt in the neighbouring Bali.

The agency confirmed the casualties and said 40 others were injured. Dozens of buildings have been damaged.

Lombok, which is about 100 km east of Bali, is a popular tourist destination, although most resorts have not reported any damage as they are located on the south and west of the island.

Indonesia sits on the Pacific Ring of Fire, a zone of high seismic and volcanic activity, that experiences around 7,000 tremors mostly of moderate intensity every year.

In 2004, a huge magnitude-9.3 earthquake under the sea triggered a tsunami which killed 168,000 people in Indonesia, and a further 50,000 people in various countries around the Indian Ocean.