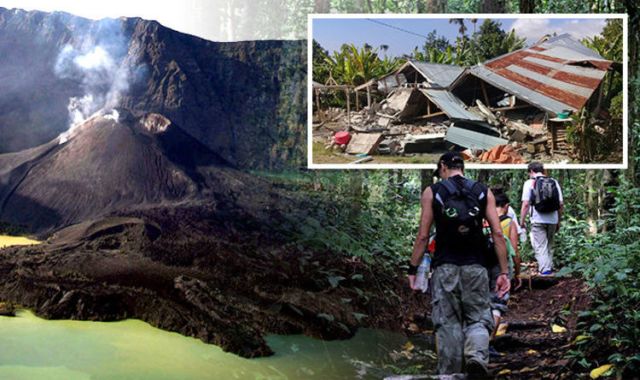 Jakarta : The hundreds of people who were trapped on an active volcano in Indonesia after a deadly earthquake killed 16 people were on Monday began descending to safety.

The 6.4 magnitude quake struck early on Sunday near Mount Rinjani on Lombok island, triggering landslides on the volcano that cut off escape routes. More than 330 people were injured.

Sutopo Purwo Nugroho, a spokesman of the National Disaster Mitigation Agency said: “Hundreds of trekkers in the crater in climbing areas couldn’t come down when they wanted to, because the paths were covered by debris from landslides and there were fears of subsequent landslides.”

The volcano, which rises 3,726 metres above sea level and is the second-highest volcano in the country, is a favourite among sightseers.

Rescuers set off on Monday morning to help nearly 700 trekkers and climbers who became stranded at two points on the peak, Indonesia’s disaster agency was cited as saying by the Guardian.

However, the exact number of people stuck on Rinjani was still unclear as there was a register of how many people ascended the volcano, but not how many came back down.

The national park authority said a key route to the summit of the 3,726-metre mountain had been cleared and that a helicopter was dropping supplies to people on other routes who were still picking their way to safety.

Rescue officials said many of the mostly foreign hikers were unlikely to reach the bottom before nightfall, the BBC reported. According to reports, among the foreigners climbing the volcano mostly Thai tourists, with French, Dutch and Spanish making up the next-largest contingents.

A Malaysian tourist on a hiking trip to Mount Rinjani was among those killed. Another young Indonesian hiker was also killed by falling rocks.

Thousands of homes were damaged and hundreds were left homeless as substantial aftershocks rocked Lombok and neighbouring Bali island. More than 5,000 villagers were left in camps and the buildings destroyed included a health centre.

Indonesian President Joko Widodo visited Lombok to meet the victims and oversee the provision of aid, including cash to help residents rebuild their homes.