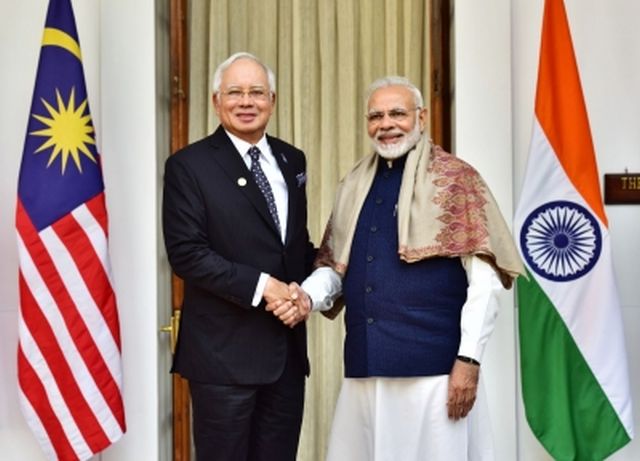 New Delhi : Indonesian President Joko Widodo and Malaysian Prime Minister Najib Razak shared their respective countries’ experience of countering terrorism during the course of their visit to India to attend the Commemorative Summit to mark 25 years of the India-Asean Dialogue Partnership, a senior official said here on Friday.

At a media briefing here, Preeti Saran, Secretary (East) in the External Affairs Ministry, said that during the bilateral meetings Prime Minister Narendra Modi had with Widodo and Razak, both visiting leaders “shared their own experiences and the legislations they have introduced in their own countries”.

“The soft and hardware aspects of countering terrorism,” Saran explained. “The hardware aspects of strict actions to be taken through enabling laws and the software actions in terms of how to ensure that the youth do not go the path of extremism or radicalisation.”

While Indonesia is the country with the largest Muslim population, over 61 per cent of the population in Malaysia follow Islam.

A Delhi Declaration issued following Thursday’s Summit said both India and the 10-nation Association of Southeast Asian Nations (Asean) agreed to “deepen cooperation in combating terrorism in all its forms and manifestations, violent extremism and radicalisation through information sharing, law enforcement cooperation and capacity building under the existing Asean-led mechanisms”.

The statement reiterated both sides’ commitment to promote a “comprehensive approach to combat terrorism through close cooperation by disrupting and countering terrorists, terrorist groups and networks, including by countering cross border movement of terrorists and foreign terrorist fighters and misuse of Internet including social media by terror entities; strengthen cooperation to stop terrorism financing efforts, and prevent recruitment of members of terrorist groups; support efforts in targeting terrorist groups and sanctuaries; and take further urgent measures to counter and prevent the spread of terrorism, while stressing that there can be no justification for acts of terror on any grounds whatsoever”.

While Modi held a bilateral meeting with Widodo late on Thursday evening, he met Razak on Friday afternoon.

Widodo and Razak were among the 10 heads of government or state from the Asean member states who attended Friday’s Republic Day celebrations as guests of honour, an unprecedented first.

Giving an overview of the Commemorative Summit, Saran said: “All of the 10 Asean countries have appreciated India’s role and the bilateral relationship we enjoy with each one of them and the fact that India has played such a positive role in the Indo-Pacific region”.

“The message we got from the 10 leaders was that they feel India is a very important component for peace, stability and prosperity of the Indo-Pacific region,” she said.

According to Saran, all the 10 leaders greatly appreciated India’s growth story.

“All of them repeatedly acknowledged the growth rates India is clocking at the moment, being one of the fastest growing economies.” she said.

She said the reforms introduced to fight corruption in India was of interest to Philippines President Rodrigo Duterte, who particularly showed interest in the Aadhaar system, digital economy and cashless transactions.

“It was another issue of interest for Singapore who would like to go more and more into cashless financial transaction,” Saran said.