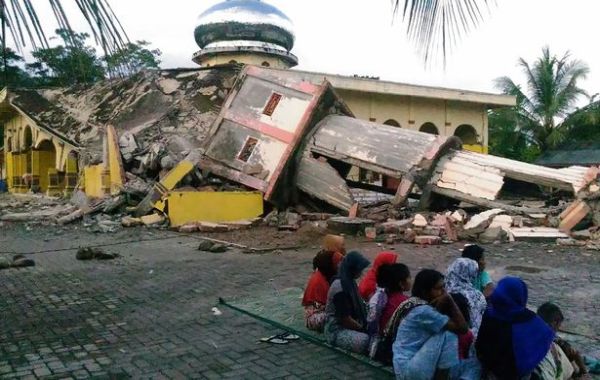 Jakarta : The death toll from Sunday’s devastating earthquake on the Indonesian island of Lombok climbed to 347 on Wednesday as rescuers continued searching through the rubble, still hoping to find survivors, the National Disaster Management Agency said.

The agency’s spokesman Sutopo Purwo Nugroho confirmed the toll. The majority of people died in Kayangan, on the north side of the island, according to the state-run Antara news agency.

Another 1,447 people were injured and 165,003 were displaced by the 6.9 magnitude quake, Nugroho told the news agency earlier.

Around 200,000 people live in northern Lombok, a mountainous region, according to the 2010 census. On Tuesday, the government estimated that 20,000 people were in need of assistance, with around 80 per cent of buildings destroyed, as aid workers struggled to reach those affected by the disaster.

“We are concerned aid trucks can’t get through because of the debris and there are also landslides happening,” Husni Husni, a Jarkarta-based representative for the Red Cross, told CNN.

“A lot of people are displaced and many have migrated to the hilly and mountainous areas because of fear of a tsunami.”

Meanwhile, the disaster management agency said on Tuesday that all of the 2,000 tourists on the Gili Islands had been evacuated.

Dramatic video tweeted by authorities showed hundreds of people, many believed to be foreign vacationers, crammed onto a beach on the island of Gili Trawangan as evacuation measures got underway.

Dozens of injured people were being treated in tents temporarily set up in the northwest of the island, as the centre was damaged by the quake.

Aid reached many of the survivors, but there was still a lack of food, water and tents in areas difficult to access.

Lombok is known for Mount Rinjani volcano and comprises about 4,500 sq km of land area. It is located east of the popular tourist destination island of Bali.

Indonesia is situated within the so-called Pacific Ring of Fire, an area known for heavy seismic and volcanic activity, which cause about 7,000 tremors a year, mostly of moderate intensity.