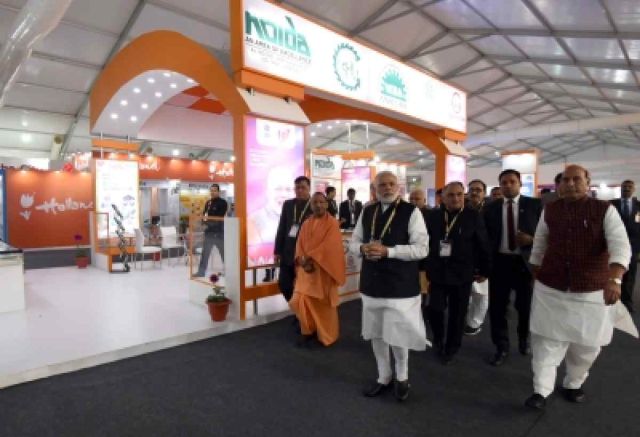 Lucknow : Industry captains heaped wholesome praise on the Uttar Pradesh Chief Minister Yogi Adityanath for bringing a turn around in the state’s environment within a year as they committed to investments of over Rs 4.35 lakh crore over the next three years on the first day of the Investors Summit here on Wednesday.

A visibly-elated Adityanath announced at the inaugural session of the two-day summit that more than 1,200 MoUs had been signed with a total amount which was almost equal to the state’s budget for 2018-19.

In his address, he said that he was happy that the investors had taken note of the transformational changes in the state and were willing to partner the growth story that had been set rolling by the BJP government in the last 11 months. He also assured the investors that his government had taken their safety and security on top priority and had done a lot to turn around the law and order situation.

Adityanath assured that all the MoUs that have been signed would be followed up seriously and it would be ensured that the facilities offered to them were adhered to in full and that they have no problems in setting up industries in the state. He also said that a a cell has set up to follow up on the investment promises and that he would personally monitor them on a case to case basis.

In his address, Prime Minister Narendra Modi announced that his government will establish a Rs 20,000-crore defence industrial production corridor in Bundelkhand — a region divided between Uttar Pradesh and Madhya Pradesh — that will generate 250,000 jobs and bring development to one of the most impoverished regions of the country.

Stressing that Uttar Pradesh had a vast potential for development but needed policy, planning, and performance, he lauded the efforts of Adityanath for setting the state on the path to give a “super hit” performance.

Kumarmangalam Birla of the Aditya Birla Group said UP was set for its front ranking place in the nation with the “hallmark leadership style of Yogi”. “I am impressed by the inexhaustible energy of the Chief Minister… am very bullish about the prospects of UP under him” he said while committing Rs 25,000 crore for the state in the next five years.

Mahindra reminisced about his mother’s early life in Allahabad and then as a history teacher at IT College in Lucknow, saying his visit was like a “home coming”.

He also thanked the Chief Minister for his promising ideas and announced that if the spirit went on course in future too he would be setting up an electric vehicle manufacturing unit in the state.

Mahindra also announced that its flagship Club Mahindra would set up a 200 bed time share unit in Varanasi circuit while Subhash Chandra also assured all help and support in Adityanath’s initiative to make UP a front-ranking state of the country.

Chandrashekharan also announced that TCS would now on not wrap up its Lucknow operations, as was the case earlier but would now also set up a 30,000 people new campus of the TCS in the state.

“TCS will continue to be in Lucknow and also strengthen its presence elsewhere in the state,” he said, also saying an IT centre would be set up in Varanasi, Modi’s parliamentary constituency.

Kamineni, who is also industry lobby CII’s President, said that she had not long ago brought with her a delegation of 60 top CEOs and announced that the Apollo Hospital was working with Cisco on an important project in Varanasi.