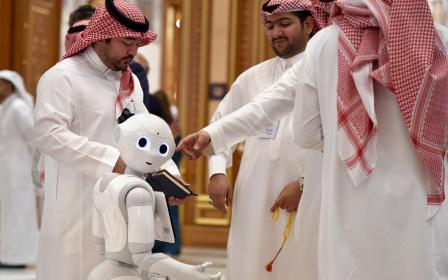 It seems Saudi nationals are running fast on the highway of liberalization leaving behind their culture and religion . Inspired by VISION 2030 introduced by MbS, Saudi Arabia celebrated the Halloween festival this year with pomp and show.

Halloween-inspired costumes and other items were sold in malls and marketplaces in Riyadh and other cities.

Arbaz, a doctoral student in California, welcomed the development. “Probably one of the most surreal moments of my life was being in Saudi on Halloween. People in costumes outside the masjid with the Adhan in the background. Felt like the day of reckoning,” he said in a tweet.

No this is not a #Halloween costume, neither a photoshop..

This is a REAL LIFE IMAGE from Yemen, caused by a chemical toxic air-strike by Saudi Arabia on Yemen. pic.twitter.com/qW5ekrgoHI

Other individuals used the opportunity to criticise the Saudi government in connection with its dual standards on religious freedom and human rights.

A photograph showing some minor victims of airstrikes in Yemen was shared by several users. They took a dig at the Saudi government accusing them of injuring children through its airstrikes.

Others also criticised Saudis saying that they ban the celebration of Prophet Muhammad’s birth anniversary but allow Halloween.