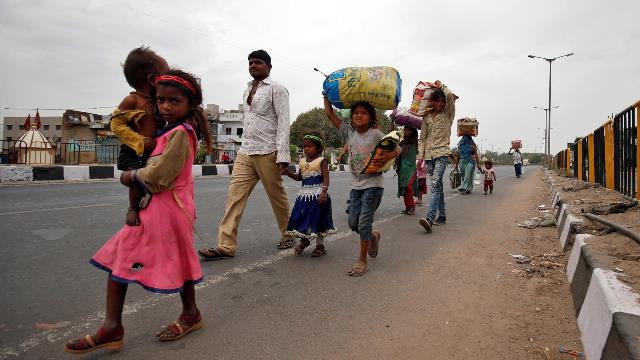 According to the Department of Health and Family Welfare, the first case of COVID-19 in the country was reported on January 30, 2020 in Kerala. After exactly three months, there have been over 33000 confirmed cases and around 1100 deaths; the number has undoubtedly grown exponentially but still a very small number compared to the starvation deaths recorded every day in India.  The government is taking a number of steps to prevent corona cases from increasing.  The words like Lockdown, rapid testing and social distancing are very frequently heard in government advisory and manuals.  The government is not missing any opportunity to pat its back for its success in controlling this pandemic. But the question here is that whether our only priority should be to prevent the spread of this pandemic or an equal effort is needed to maintain the social and economic equilibrium as well.  Even if we win this battle against Corona, the worry is that a large number of people may be victims of acute poverty and starvation.  India has already been struggling badly on most of the parameters of food security, hunger and malnutrition. We ranked 102 out of 117 countries in the Global Hunger Index (GHI) 2019. The GHI report pointed out that “India is suffering from a serious hunger problem”. As per the report, the child wasting rate is the highest (20.8%) in the world while the child stunting rate is 37.9% in India.  But despite all these facts, the government didn’t make any visionary plan keeping in mind the other crises and challenges associated with the decision of an arbitrary lockdown.    This late and abrupt lockdown across the country rudely uprooted at least 40 million lives, so much so that hundreds of people died already trying to return home, awaiting food, or attempting to get to a hospital amidst the national lockdown.  The situation is such that the poor and migrant workers are suffering double whammy, if they stay at home, they are starving, and when they go out, they are being treated mercilessly by the police.  A few days after the lockdown was announced, the condition of those who did not have the money to buy a month’s ration, started deteriorating. In Delhi alone, there are about 3m to 4m workers. Due to the closure of the factories and freezing of social and economic activities, more than half of the laborers depended on the government for even one time meal. The situation became catastrophic with the government having no plans for these invisible citizens moving to big cities in search of employment. With no hope of government assistance, millions of laborers along with the females, old and children of their families, put a bundle of their fiefs on their head and set out for thousands of kilometers on foot. In this chaos, the migrant workers who needed the Government’s hands of sympathy on their shoulders were lathi-punched on their backs. Brutality crossed the limits when in an inhuman move; a group of workers were doused in disinfectant at Bareilly bus stand while returning home from national capital.   In Surat, migrant workers complained of not getting enough food, wanted to return to their village for fear of starvation in an unknown city. The fire of stomach ignited anger and they turned violent after which cases were filed against over thousand migrant workers, around 90 were arrested, including eight minors; hunger criminalized them. Similar visuals came from Anand Vihar in Delhi and Bandra station in Mumbai.

More than vision and strategy, the government has shown lack of sensitivity towards the poor. If there had been a slightest of sensitivity in government, a 12-year-old innocent girl would have not been forced to make a journey of over 100 km on foot. One of the many frightening and touching pictures of lockdown is that of Jamlo Madkam. In this summer, when the elders and children in affluent families were sitting in AC and looking for ways to pass the time in lockdown, this girl, who was a migrant worker in Telangana, was covering the journey to her home in Chhattisgarh. She walked for three days but unfortunately died barely 11 km from Home.

In a similar incident, Ramji Mahato, while walking Delhi to his home in Bihar got breathless as he reached Banaras and he lost his journey of life halfway. In another incident, a man and a pack of stray dogs were seen in a scramble for milk spilt on a road in Agra. When a large milk container overturned, sending a stream of milk down the road, a pack of dogs was joined by a man who is seen trying to scoop up as much of it as he could in a small earthen pot.  There are several such stomach-churning visuals that show the desperation of the country’s poorest and the insensitivity and failures of the governments during the nationwide lockdown.

PM Modi, however, apologized for the problems faced during the lockdown, but what should those who are suffering do with such an apology. The governments didn’t do what they could have done. When the first phase of 21-day long lockdown was announced, the government’s entire strategy should have been based on ensuring food and shelter arrangements for poor and migrants so that they could survive where they are but no blueprint was prepared to deal with the hunger situation.  After criticism from all the corners, the government announced the Pradhan Mantri Garib Kalyan Anna Yojana (PMGKAY) as a corona relief package under which five kilograms of food grains will be given free to every person for three months (April-June). Free ration and Rs 1000 thousand will be given to those who have ration card, Rs 500 will be given in Jan Dhan accounts, wages will be increased in MNREGA etc.

But what will happen to those who have neither ration card nor Aadhaar card. The Jan Dhan account was opened but is closed due to lack of transactions. Mostly the landless and houseless people of the country are beggars, garbage pickers, vendors selling small items in crowded areas or in public transports and rickshaws pullers who are forced to pass their nights on the city footpaths, under the bridges and around the temples and mosques. These are the people who are deprived of access to government-run welfare schemes.  Even during the lockdown, these groups have not been able to fully benefit from government assistance and are struggling to save their existence in this long-term lockdown. This lockdown has endangered the lives of poor and homeless people like these. Even if they survive the threat of corona virus, they can die of hunger and related diseases.

We have adequate resources. In 2020, Food Corporation of India (FCI) had 775 million tons of food grains, which is three times the buffer stock. The quantity of grain storage will increase in the coming days because the procurement of rabbi crops is going to happen. Therefore, the need of the hour was to open the excess ration lying in the stock to make it available to all the needy without the obligation of ration card. But the government is still embroiled in the rules and regulations. Perhaps doing all this is not as easy as giving loans to Vijay Mallya and Nirav Modi or writing off the bad loans of the company’s of Mehul Chowki and Baba Ramdev. Ironically, the government recently allowed the surplus rice available in Food Corporation of India warehouses to be converted into ethanol, to be used in manufacture alcohol-based hand sanitizers. Can the battle against Corona be won with empty stomach and sanitizers in hands?

May 1 is marked as International Labour Day; the day celebrates labourers and the working class. But unfortunately at this time, millions of our migrant laborers are living away from their homes either in the shelter home under difficult conditions or are forced to live without food and water in the settlements.  The time is equally tough for their families far away from them. In a much delayed but a right decision, MHA has issued a guideline allowing interstate movement of stranded migrants. Not for political gain or accolades but for restoring the faith of people in governments, the state governments should arrange immediate and safe return of their stranded migrant workers.

200 arrested as chaos erupts at May Day rally in Paris