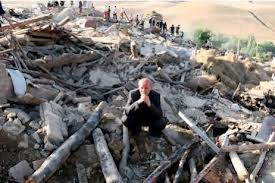 “It’s business as usual at the station,” a Rosatom representative said. “The station did not even feel any tremors as a result of the earthquake.”

At least 40 people were killed when a huge earthquake struck southeastern Iran Tuesday, Press TV reported. The earthquake, with an estimated force of 7.5 on the Richter scale, hit the provinces of Sistan and Baluchistan near the border with Pakistan.

The Bushehr plant is located about 160 km from the quake-stricken areas.

The Iranian Seismological Center (IRSC) said the epicentre of the quake, which occurred at a depth of 18 km, was 95 km north of the city of Saravan, the IRNA news agency said.

Shockwaves were felt in neighbouring countries and as far away as India’s capital New Delhi. The earthquake was also felt in the Persian Gulf’s littoral states of Bahrain, Kuwait, Oman, Saudi Arabia and the United Arab Emirates.

Earthquakes are a common occurrence in Iran due to the convergence of four major tectonic plates in the region, according to the US Geological Survey.