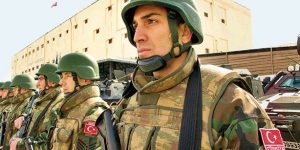 “Iraq will pursue all peaceful dialogues in order to avoid crisis, but if fighting with Turkey is imposed on us to protect our sovereignty and our wealth we will consider that,” Jaafari told reporters at a press conference in Baghdad, Xinhua reported.

He denied, however, any “time limit to the (peaceful) move against the violation of Iraqi sovereignty,” admitting “common interests with Turkey”.

The crisis between the two countries flared up in early December when Turkey deployed reinforcement troops, equipped with armored vehicles, to a camp in Bashiqa area near the city of Mosul to train Sunni and Kurdish paramilitary fighters to battle the Islamic State (IS) terrorist group.

Mosul, the capital of Iraq’s Nineveh province, has been under IS control since June 2014.

Baghdad has insisted that the Turkish troops have no authorization from the Iraqi government and thus demanded their withdrawal, while Ankara called the troops only a routine rotation of the trainers.

Iraqi Prime Minister Haider al-Abadi is pressured by Shiite militias who are angry over foreign troops in the country, as the Shiites are instrumental in Iraq’s anti-IS campaign.—IANS