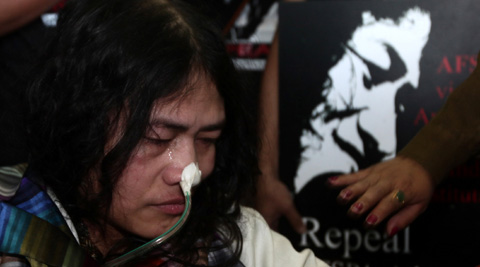 The story of a woman can be inspirational for all who has kept the world longest fast for setting the stage of a protest against special act on Armed Forces. The Lady Lion Irom Sharmila from Manipur is no news but now has become an epic while she has announced to break her fast. The sincere lady has raised her sonorous voice against repealing of ASFPA from her native state.  The story serves a mature intention of a citizen and her honest step towards showing her objection  at the front. The Administration side is not fully secured if we are not in position to receive the same agreed statement from the people for who the Special Act has been formed. The 16 Years fast of Irom is not an easier to show a rigid protest against this Act. It is like a pressure for the government to check it out whether the enforcement is at wrong place or the laws under the act needs amendment. The Government has declared enforcement of the Armed Forces ( Special Powers ) Act as lawful as well as mandatory to ensure security and safety of the state and its people. The seven sister states covers the border of four countries respectively i.e; China , Bhutan, Bangladesh and Bhutan.  It is obvious to bring the state into the anti-evil condition. For that purpose , the Special Powers Act has gained “yes “ from the authority. Now , It is very  urgent to take a deep concern over the matter , each pros & cons to be checked minutely ; else another 16 years can be a life loss. By the grace, The Irom soul is still waiting a positive response from the law maker.

Once she wrote “I will spread the fragrance of peace” she means to spread essence of peace all over. She has journeyed from a life of poetess to a protagonist is commendable. We must pray to rescue her life from indulging in hopeless mind. The lamp of justice needs to be lightened to support a pure intention either by abolishing this act or by improving some laws within it.

Ending of the fast will be a peaceful day for Irom’s family & folks; but this will not sure the mental state of the Iron Lady herself; because she is again going to display her denial against the Act by fighting election. As the protagonist has really marked a sense of   strength to dictate her term following the process of non-violence and non-damage. The Gandhian way of taking trouble without any agitation to prove one’s fight is right is completely portrayed in the Irom’s story of protest.

Living a life of ailment , she has never come to quit with all pains & patches in her body.A true guard of her own state has earned international attention to shock the Act maker ; then why not a re-concern over the Special power act ; not for the sake of total repealing of the act but to put the Act in comfort and flexible zone. Unnecessary enforcement by making available of the rule & shoot kind of act is unbiased . It needs to be on forum for a re-study whether it is applicable or no need to surplus a state with an unwanted force.

The way Irom has shown her objection is a force to be reckoned with ; we as supporter admire her stamina and confidence to push the issue to an unending battle. Amid next Election , she will get more voices to speak with her, then what the administration will do. If majority is with the right person, other side will automatically be weakened to kneel down. So, the right time to justify the whole issue by gathering the people opinion which will possibly be an conflict – free step towards the peace establishment in the region.