Nothing more unprecedented has ever happened when in January 2018, four-sitting Supreme Court  cried ‘democracy is in danger’. That was BJP led Modi government 1.0, and since 2019, when it strode to power again, there seem nothing to have changed, as SC, in almost an utter frustration has called that the Modi government 2.0 cares a fig for it!  What is to be next? A heady-showdown between the SC and the BJP government, where there are clear signals that SC wants to avoid it too!

The latest to have come is on the appointment of the various Tribunals, all across the nation, lying unfilled , thereby, adding a tremendous extra load on the SC, as after all, the tribunals are the ‘rooms for redress’ for the aggrieved persons whose first window to knock at a Tribunal, but where to seek it, when tribunals have, to an extent, all been knocked-down.  It has been reported by The Indian Express  on September 7 1 that SC has called that Modi government is hell-bent to test its patience and does not have any respects for its rulings, as SC slammed the government over the vacancies in Tribunals. ‘The bench also came down harshly on the Centre for passing Tribunals Reforms Act, which the Court termed a “virtual replica of the provisions struck down by the Court.’ The SC ‘ pulled up the Centre over the delay in making appointments to various Tribunals, and for enacting a new law on the selection and tenure of Tribunal members despite the court having quashed similar provisions earlier. The court said the government was testing its patience, and seemed to have no respect for its rulings.’ Chief Justice of India N V Ramana, was heading a three-judge Bench with Justices L Nageswara Rao and D Y Chandrachud.

The SC wanted to know as to how many appointments have the government made, as the latest Tribunal Reforms Bill passed by Parliament in August last had already caused a lot of heartburns to SC, but this time SC has clearly given three options saying that SC may stay the legislation and direct the Modi government to close down the Tribunals and assign powers to HC to take up the matters or that SC itself appoint the people. Nothing more of a disgrace could ever be to any government. SC also warned to initiate contempt proceedings.

In the latest appointment of 68 HC judges as per SC collegiums, the government has objected on 12 of the members, which is again an affront to SC.  SC, it may be noted, in context to Tribunal Reforms Bill, had already earlier struck down the provisions, which were part of the ordinance, as it had stipulated the minimum age limit for appointments to be 50 years & provided for a 4-year term for members. However, today the National Company Law Tribunal (NCLT), National Company Law Appellate Tribunal (NCLAT), National Consumer Disputes Redressal Commission (NCDRC) and Armed Forces Tribunal etc have all virtually got collapsed and become almost dysfunctional in all these last few years. Around 250 positions are lying vacant and needs to be urgently filled so as to meet to the pressing requirement of the time. The SC has given a week-time for the necessary appointments- but will that happen? Surely, the government seem to have taken to a back-foot.

It hadn’t been that late, as only on September 4, when the CJI NV Ramana, while being felicitated by the Bar Council of India, had referred to the handicaps the Judicial system is facing in India like deficient infrastructure, shortage of administrative staff and the worst- the huge vacancies of the judges pending for long. He asserted that what India needs, with an immediate effect, in order to bolster the judicial scenario, is a National Judicial Infrastructure Corporation and that a detailed report on the requirements of buildings, chambers etc would be submitted to Law Minister Kiren Rijiju by he himself as he has collated it from every noon-and-corner of the country.  He even referred to the unavailability of women’s toilets within the courts premises. This would surely draw a further flak as Modi government has always made tall-claims about making toilets in the country, whereas the reality, seem to otherwise!

In another serious jolt the SC has issued a notice to Modi government on September 7 and has asked the registry to ‘issue a notice’ in the Mamta Banerjee led West Bengal government suit against CBI investigation as the WB government has alleged that CBI is going ahead with investigation ( in post-poll violence) without securing consent from the state. The order was passed by the bench headed by Justive L Nageswara Rao. It is to be eagerly awaited as to what would be the outcome of this case as PM Narendra Modi had to face a shameful defeat in WB despite bludgeoning every force available to dislodge Mamta Banerjee but instead Banerjee romped home with a great majority. WB is going for by-polls on three seats.

The BJP government in Haryana run by ML Khattar is also in bad waters, as the Punjab and Haryana HC has sought a response from it on a plea of seeking a judicial enquiry into the Karnal’s lathi-charge incidence of August 28. The brutal lathi-charge on peaceful farmer’s protest, is right now in the eye-of-storm as voices from all over India have condemned it in unequivocal terms. The protest of farmers, against the three-anti-farmers laws of the BJP government, have been going-on unabated since nine-months. The farmers Mahapanchayat in UP on September 6, against the same laws has seen crowds, as never before, in the last couple of years. Surely surpassing the hundreds-of-thousand figure, and no winder it has now become the expression of general public against the BJP government, as after all the farmers are the bone-marrow of the nation!  Even NHRC has sought a report over the Karnal’s violence. 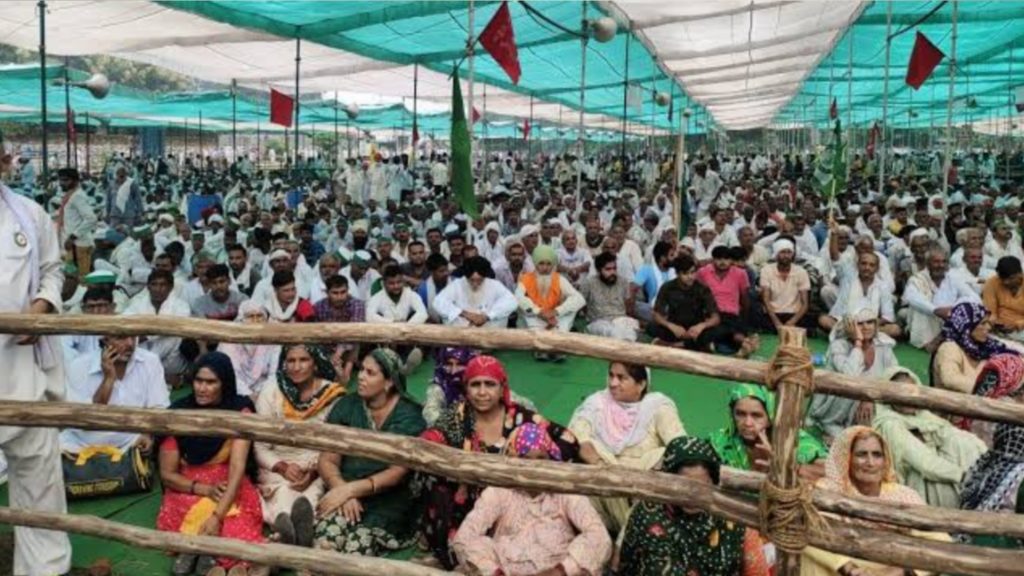 If at all the developments of the last few days may be surmised, it becomes clear that the topmost law body of the nation has given enough warning-signals to the BJP government, and if, there is now to be any dilly-dally, perhaps, an all out showdown between the two might be on the cards, but perhaps, it is very high time that SC intervenes and put-things-into-order, or else, everything has been into disarray. Right time for SC to take-up the cudgels.

One thought on “Is Modi government heading for a ‘showdown’ with SC ?”