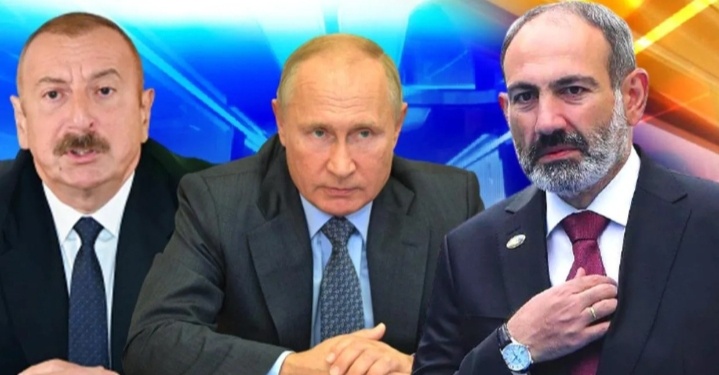 The most dangerous probability of a ‘Russian-Turkish’ war over the on-going war between Armenia and Azerbaijan, where the former was with Armenia and the latter with Azerbaijan, has been averted as Russian president Vladimir Putin called both the warring nations foreign ministers to Moscow and both have decided to call for a truce, as according to IndianExpress on October 10, 2020 1. The 14-days war which saw hundreds killed has come to an end, after 10 hours of talks, and a ceasefire has been declared. Both the nations were once a part of the erstwhile Soviet Union until 1991 and both had gone for over a war in 1991-94.

The picture emanating out from the theatre of Nogorno-Karabagh war zone, is that Turkey has emerged as a clear victor as Turkey went ahead with its full support towards Azerbaijan and Armenia, though was supported by European Union, as well as by Russia, could not find Russian help coming, and the possibility of US jumping into the fray, after the November 2020 elections, has also just been to an extent got diminished.  On October 10, 2020, a report at News.Az 2 reported that Azerbaijan had destroyed Armenia’s S-300 system and it was here when Russia decided to call for a halt.

However, as a matter of fact, the Turkish president Tayyip Erdogan played his cards well as Iran which was initially playing ‘neutral’ in the conflict for Iran wanted to symbolise with Russia, had become jittery over the possibility of an ‘unrest’ by around 20 million Azerbaijani Turks living in Iran, which made Iran to draw its feet from open support to Russia, which was to mean a support for Armenia. Hence, before things were to go-out-of-hand Putin, Erdogan, Iran president Rouhani- the considered major players inside the conflict, decided to douse the fires! As after all, if this battle was to escalate then it would have meant all the anti-US forces fighting amongst themselves.

Turkey and Russia have also been lately engaged in joint military drills in the Mediterranean sea, reports TheHindu on September 4, 2020 3 which is on both the sides of Cyprus, and had thus, silenced Greece and other European allies, particularly France and UAE, in their ‘front’ against Turkey.  Turkey on October 8, 2020 detected Greece (US made) F-16 fighters by its Russian supplied S-400 which obviously has enraged the US senators who have pressed for sanctions against Turkey, reported UPI.Com 4, and going the stride with which Turkey is moving, it won’t be a surprise that Turkey may even drown the US F-16, which would be considered as something unprecedented in the history of modern warfare, and a signal to start an absolute different power dynamics in the whole European region. No wonder voices are gaining  in size to expel Turkey from NATO of which it is member since 1952.

Russia gauged the escalating situation and did not let the conflict ‘spar over’ as Azerbaijan supported by Turkey was in a plus-situation to Armenia and Russia also analysed that it may loose Iran as ‘a long time ally too’, as Iran was constrained by its Azerbaijani Turk population and Erdogan meanwhile for financial-backup also visited Qatar on October 7,  2020 5 according to Al Jazeera  where he was given an assurance that Qatar would provide the financial bulwark to Turkey as it has done in the past. Turkey considers Qatar as its vicegerent to its erstwhile Turkish Empire or Caliphate which came to an end after World War-I. Here, after this ceasefire brokered by Russia, the Arab-states which are now head-over-heels with Israel will further be deterred by the rising presence of Erdogan as he did not ‘backed-out’ of Azerbaijan support and despite being an ally with Russia in Mediterranean sea, saw eye to eye with it and also with US with which Turkey is engaged into opposing the purported ‘deal of the century’ which is nothing but an annexation-plan of West Bank of Palestine, from which in fact once Israel was born, out of the support of British and other colonial powers in 1948. Ironically Israel has very nice relations with Azerbaijan but  decided to keep mum over the conflict.

The ‘cessation of hostilities’ charted by Russia is surely a victory for Azerbaijan which by extension is a victory of Turkey. Turkey is now clearly straddling towards its leadership goals and has taken Pakistan in its stride and has time and again echoed the Kashmir sentiment from Pakistan perspective which has spelt a wrong message for India. All the Arab-states are now in the bloc against Turkey which is raring to make another bloc with Pakistan, Malaysia, Iran with Russia and China support against the bloc which has Arab states along with India, Israel and US, Japan and Australia etc. Pakistan, therefore, quite understandably stood by Azerbaijan , more particularly so, as Azerbaijan had offered to supply oil to Pakistan as Kingdom of Saudi Arabia had decided to scrap oil on deferred loan to Pakistan, on August 14, 2020 6 .  China has already pushed Russia to sell S-400 to Iran, informs Eurasian Times on October 9, 2020 7  and the possibility of Pakistan accruing to them in any near future cannot be ruled out, as China considers Pakistan ‘quite-close’ to it.  India is slated to get to S-400 by 2021.

Russia, had to get its act together and acted swiftly to avert any dangerous situation which could have disturbed its polity, as it has come to be known, through a report via En.Armradio.Am on October 7, 2020 8 that Afghanistan warlord Gulbuddin Hekmatyar was ready to send Afghan mercenaries into Azerbaijan and also that the Russian intelligence chief had apprehended that Azerbaijan could become a launch pad for Islamic militants to enter Russia, according to News18.Com on October 7, 2020 9. Russia surely did not want to enter into the same quagmire again. But, this is also a message that on Turkey’s call Islamic fighters are also raring for a go! Meanwhile, as the latest reports are pouring in, both Armenia-Azerbaijan have accused each other over violation of ‘ceasefire’, according to In.Reuters on October 11, 2020 10 , which is quite understandable, as the flames of 1994 war, which saw around 30,000 killed, does not seem to cease that easily.