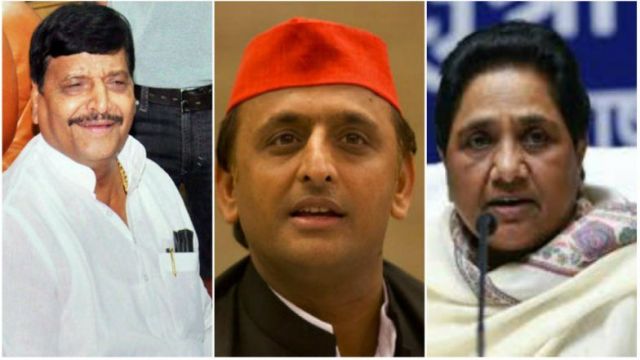 Lucknow : Is Shivpal Singh Yadav, the estranged uncle of Samajwadi Party (SP) chief Akhilesh Yadav, the weapon the Bharatiya Janata Party (BJP) is looking for in Uttar Pradesh — a state which gave it 73 of 80 seats in the 2014 general election, but where it is threatened by the coming together of the SP and former Chief Minister Mayawati’s Bahujan Samaj Party (BSP) ahead of the 2019 Lok Sabha elections?

While the jury is still out on the “lethality of Shivpal”, the Yadav chieftain is already braced for a long haul against what he describes as “injustice and marginalisation of seniors within the SP”.

Sidelined in the SP, Shivpal has openly rebelled against his nephew after a 22-month hiatus and has floated his own Samajwadi Secular Front. This, many feel, is an open signal that all efforts to mend fences in the Yadav clan and among the party satraps have failed. Mulayam Singh Yadav, the elder brother of Shivpal, who has on many occasions preferred him over his son Akhilesh, called his younger brother for “another round of peace-making” but the latter refused, saying time has run out.

“I have taken a final and logical step, it’s impossible to go back now,” he told reporters recently, while pointing out how he had waited for long to be rehabilitated in the party to which he had given his “blood and toil” to bring it to its present status.

“They do not invite me to any party meetings, my counsel is not taken, the present dispensation in the party continues to ignore me,” Shivpal told IANS.

He has also started meeting party workers across the state and has announced that his Front would field candidates in all the 80 Lok Sabha seats in 2019. Though he trashes reports that he has the backing of the BJP to act a “vote katwa” — a vote “cutter” — and dent the prospects of the potential BSP-SP combine, it is a fact that any vote weaned away from SP by Shivpal would be a plus for the BJP, which is in choppy waters and is fighting hard to retain its position in Uttar Pradesh, a state which gave it a three-fourth majority in last year’s assembly polls.

Known for his organisational skills and camaraderie with party cadre and leaders of other parties, Shivpal’s decision to float the Samajwadi Secular Front, political pundits feel, is a step towards roping in other regional parties so that his “political value gets a boost”.

Two former MLAs — Raghuraj Singh Shakya of Etawah and Malik Kamal Yusuf of Domariaganj — have resigned from the BSP to join Shivpal.

“Yadav may not throw his lot in with the BJP openly, but he certainly is a potent weapon in the armoury of (BJP President) Amit Shah,” says a senior leader of the BJP.

There are those who feel that Shivpal is acting at the behest of old colleague and Rajya Sabha member Amar Singh who has the backing of Amit Shah, the man feeling the heat of the SP-BSP alliance. “The script is written by Amit Shah as the ruling party has lost all by-elections since Akhilesh-Mayawati came together and if this continues Modi’s dream of returning as Prime Minister goes up in smoke,” an SP veteran told IANS.

Shivpal himself has given signals of going soft on the BJP; he recently said that Chief Minister Yogi Adityanath was honest, but the bureaucrats were letting him down. Amar Singh too has publicly said that he had arranged a meeting between a BJP big shot and Shivpal, but the latter did not turn up. The quick recommendation to the Union government of Shivpal’s IAS son-in-law for extended deputation has also raised eyebrows about the growing proximity between Shivpal and the saffron camp.

Keeping in view his close ties with Shivpal, political observers here are also keenly watching Amar Singh’s hobnobbing with the BJP. He has lost no opportunity to praise BJP leaders, specially Prime Minister Narendra Modi. Last month, at a public event in the state capital, Modi reciprocated by saying that “Amar Singh is sitting here, he knows all and can expose everyone”.

When asked about Shivpal’s rebellion against the party and his forming a Front, Amar Singh told IANS that this “was just a trailer” and that “picture abhi baaki hai”. He, however, added that “the political journey of Shivpal is a matter (for discussion because) he has nothing to do now”.

Like Mayawati and Akhilesh, who have joined forces in their common hatred for Modi, the Shivpal and Amar Singh are anchored their common dislike for Akhilesh Yadav. The 63-year-old Shivpal, insiders say, has vowed to “teach Tipu (Akhilesh’s pet name) a lesson of his lifetime”. Shivpal Singh Yadav, thanks to his many stints as a powerful minister in Uttar Pradesh, has a popular base in many central districts.

Both Shivpal and Amar Singh are insiders who know too much and have the potential of causing colossal damage to the SP, chuckled a senior minister in the state government, who added that their covert joining hands with the BJP will certainly damage the SP if not benefit his party.

He must, however, to realise that many regional satraps, mightier than him like Kalyan Singh, have fallen flat on their faces once they left their parties for personal ambitions.

A many-time legislator from Jaswantnagar, Shivpal may not be the wrestler his elder brother Mulayam is, but he sure has some moves up his sleeves to take on his nephew and former state Chief Minister Akhilesh Yadav and spoil his plans for a comeback piggy-backing on Mayawati and her BSP. How far he succeeds, only time will tell