The Ashraf Ghani catapult was all expected. The Afghan Taliban (AT) were to capitalize and had offered him to leave the government a few days back but Ghani spurned the chance, perhaps, to first strike a deal with US establishment, before fleeing the capital of Afghanistan Kabul. The deal, of course, which anyone can decipher, was to seek-a-word from US to never question the mammoth wealth accumulated by Ashraf Ghani and his ilk, and invested the world over, including US. The city of Kabul has fallen to AT, triggering a stampede towards the Kabul airport as nearly ‘all-and-sundry’ have made a beeline to anyhow leave the war-strived nation. Ghani was to leave for Tajikistan but his plane just hovered in the sky, not able to land and perhaps landed in an undisclosed location. It will take time, for any investigative-journalist, to unravel as to what was ‘going-on’ until his flight landed.

The US and Ghani plan had actually boomeranged as it was expected that with the advancement of AT, Kabul would succumb to chaos with massive looting and pillage of markets etc becoming a norm but all that did not happen and AT entered Kabul, with the proverbial ‘by not firing a single bullet’ as one-after-the-other commanders of Ghani just surrendered. Surprisingly, AT have as yet not executed any. It is through social-media that information tends to percolate or else there is a dearth of any objective news, in this otherwise information-world.

It is learnt that before Ghani had boarded his plane, there was a spurt in a number of arrests and surrenders as Qaisari, a commander known for his brutality had surrendered. This came along with the arrest of one of the most cruel warlord, the uncle of Abdul Raziq Achakzai who has been the one responsible for hundreds of killings. The Governor of Logar, Abdul Qaiyyum Rahimi had also been arrested. This all had begun since Ismail Khan and other high level officials of Kabul administration, including interior minister, had earlier surrendered. Kandahar Governor too had surrendered on August 13. AT on the same day had renamed Abdul Raziq Square to Omari Chowk. The ‘writing on the wall’ of the new beginning can easily be witnessed. The police headquarters of Herat had earlier fallen and AT had broken the prison of Helmand and Kandahar to set-free hundreds of arrested AT by the erstwhile Ghani government. 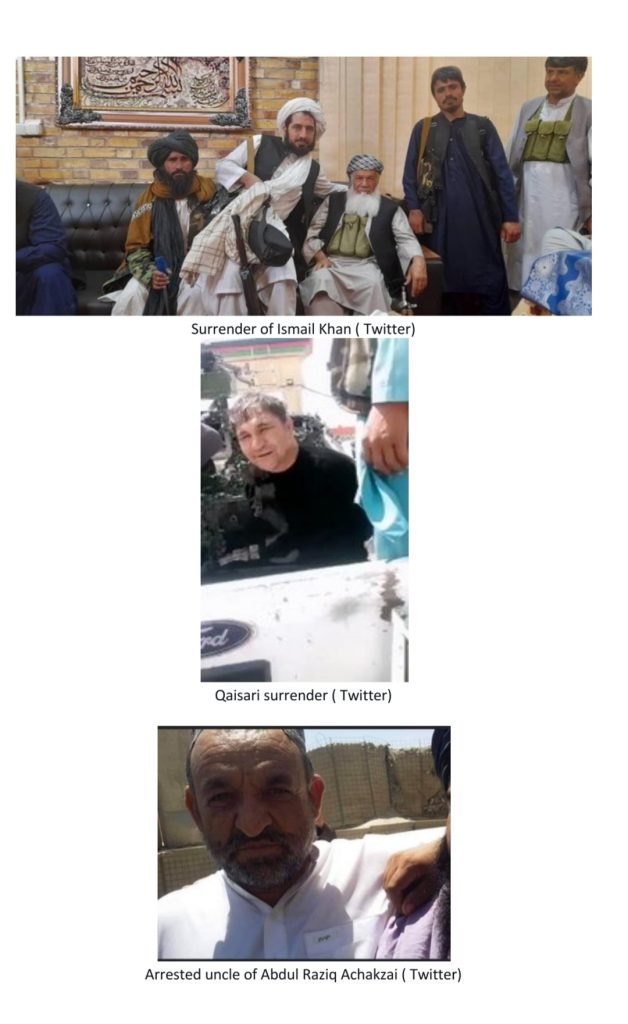 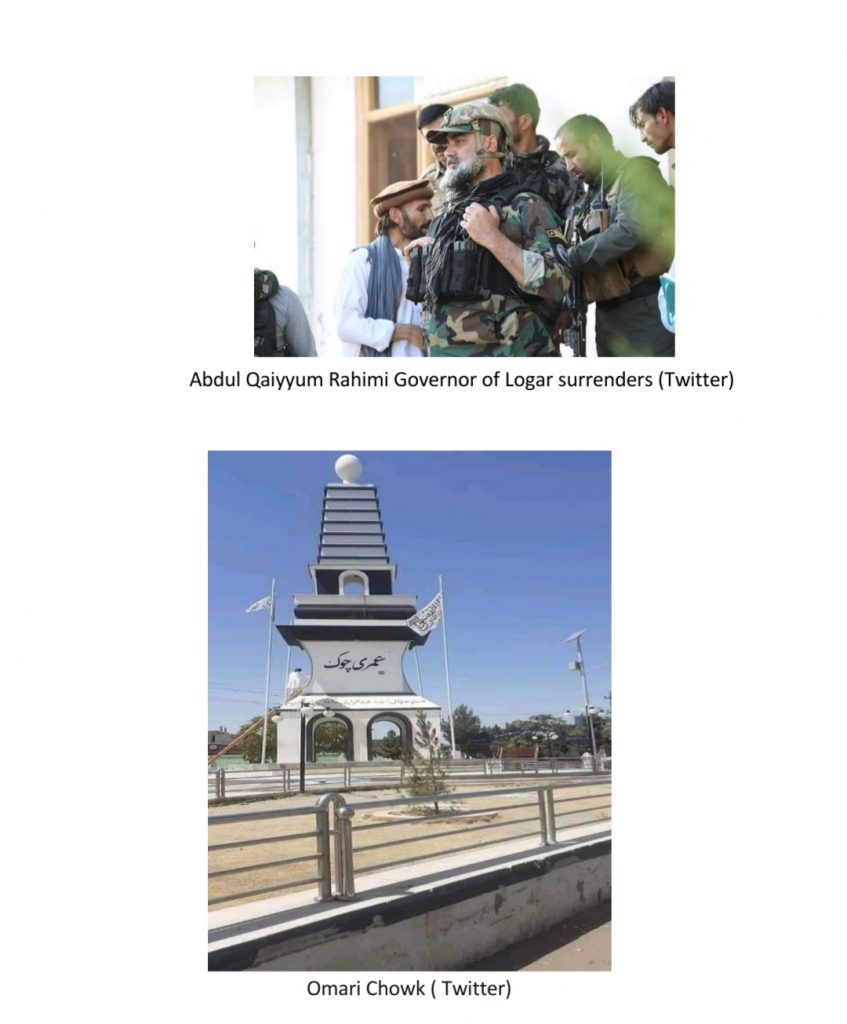 Perhaps, three incidents in the last week that set up for such a rapid downfall of Kabul regime was when AT seized Indian Mi-35 Helicopter in Kunduz and immediately what followed by downing of an Iranian drone and the seizure of US Boeing ScanEagle drone on August 12, according to Defenseworld.net. This was supposedly one of the most advanced and sophisticated drone from US weaponry. The message which AT gave was that the days ahead would be unsparing and despite Iran hosting AT, yet its surveillance drone was downed, thereby signaling that AT was no more to allow their territory for any espionage etc. 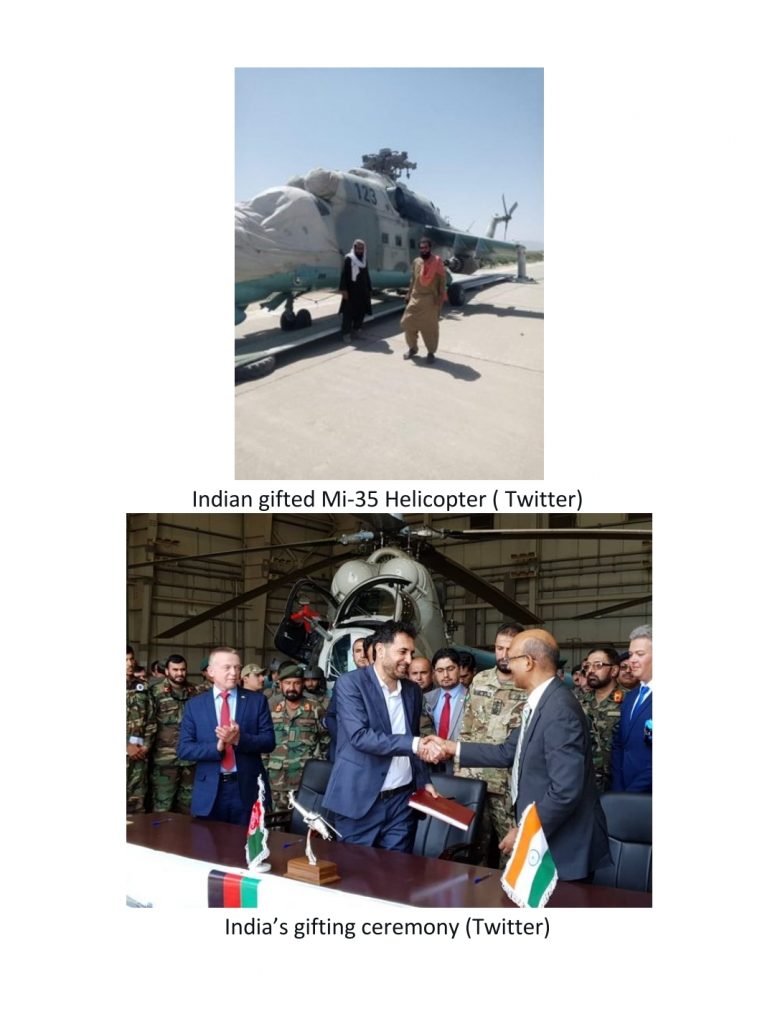 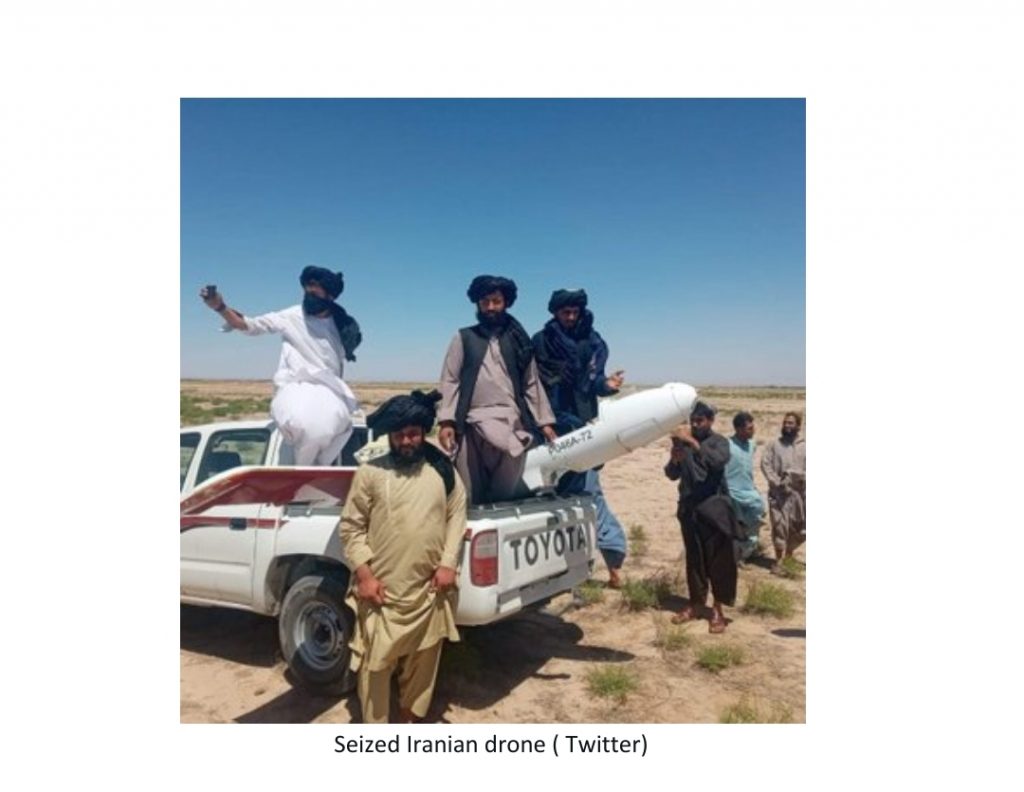 It is now getting clear from various news outlets that AT have deputized Badri Forces, which is aka Navy Seals of US, to protect the Presidential Palace at Kabul after Ghani has vacated it. The AT strategy is also not to let the identity of Badri Force be revealed. Ironically, this Badri Force draws its cue from the first 313 volunteers of Prophet Muhammed who waged the war against the tyranny of Mecca 1400 years back. This Badri Force is supposedly very disciplined as the pictures from inside Presidential Palace do not show any signs of ransacking or vandalism but everything seem to be in proper place! AT are now to announce the implementation of Islamic form of government, which in an extremely uphill task, more particularly when Islamic countries, do not vouch for it, and also supposedly loath it.

There is a stoic silence on AT victory by the Muslim countries as the dread of an Islamic form of governance may soon gain momentum, if AT are able to conduct such a government in the coming successive years. The spill-out of massive protests inside Muslim nations is what may be the ‘haunt’ inside today Egypt, UAE, Pakistan or Kingdom of Saudi Arabia. If Ghani, with the world best forces behind him may be dislodged why not it encompass such nations too? There have been no reported incidents of shops and properties ‘looting-spree’ in Kabul as yet! There are scenes of AT dining inside the once house of Ashraf Ghani. The Badri Forces are is full-command. Mulla Baradar is set to become the new President. India which has already vacated its Kandahar, Herat and Mazar Sharif consulates has got its 129 citizens back to Delhi on August 15. 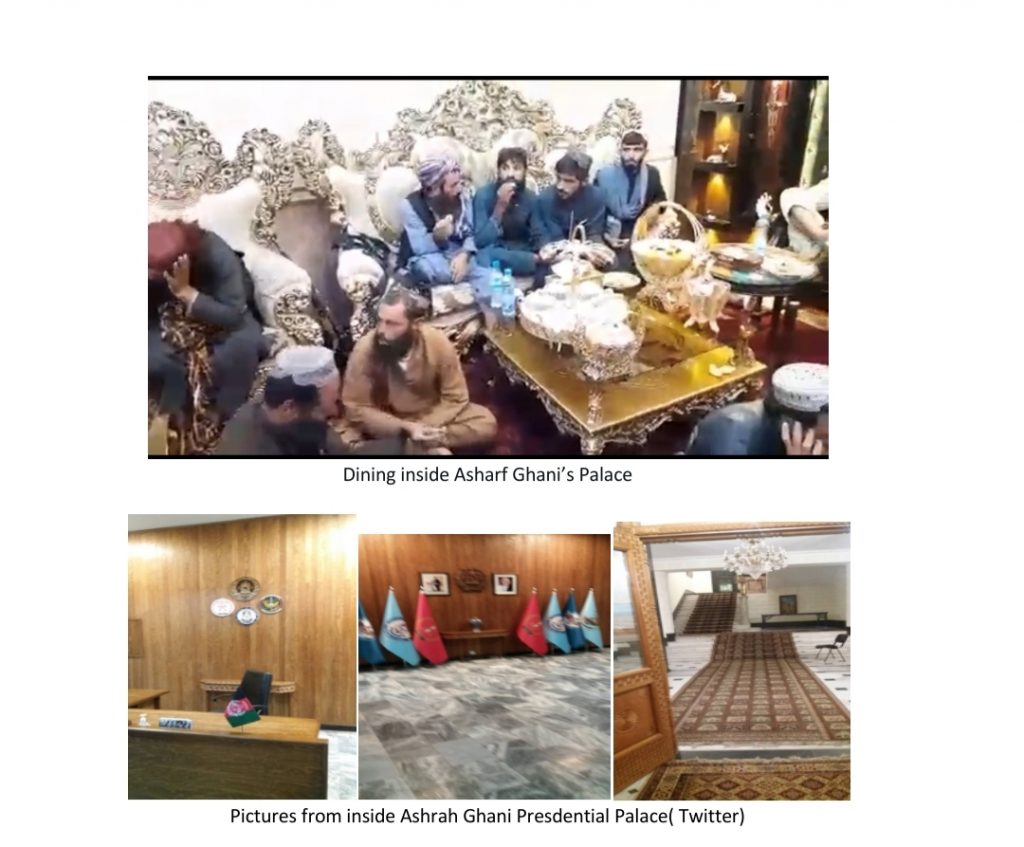 The video of ‘sobbing’ AT recitation of Holy Quran verses, has gone viral all acorss the globe and particularly inside the Muslim nations. The US is flabbergasted as a debate is raging inside US establishment over the ‘fruitlessness’ of the US sponsored war of 20 years, and the trilions of dollars spent on trainingof anti-Afghan Taliban forces, which could not even sustain for a month! The presidential-palace has fallen, even as US still has 16 more days to finally leave. US President Joseph Biden has assigned August 31 as the deadline and September 11 to be the date for full-wirthdrawal of US and NATO forces, co-inciding with the September 11, 2001 twin-tower attack on US. 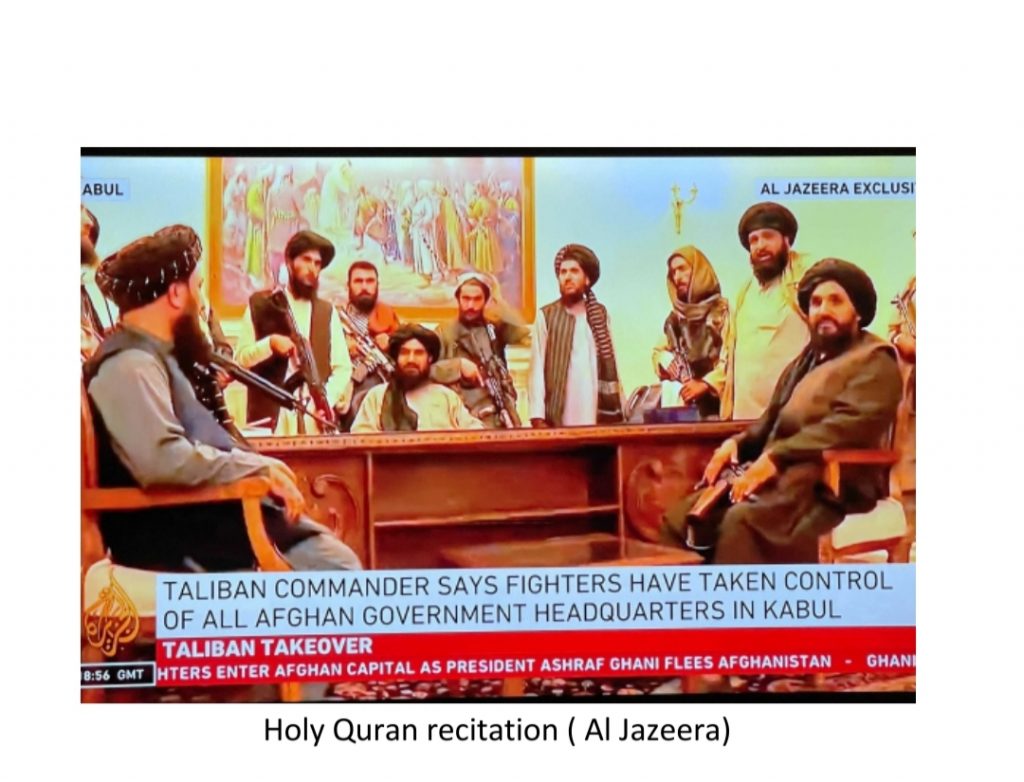 The disaster which US has had and the mockery it made of itself is for the whole world to analyse. It is now a spent force as China and Russia ‘duo’ have become more formidable to US as a super-power. The US Congress is an a tizzy, CIA and US media-houses are proverbially ‘scrathing-their-heads’ as to how Ghani forces could not offer even the slighest resitance and fell by the slighest change of wind! US is scrabling to find-the-answer, while England PM Boris Johnson has said not to recognise AT government. But, it is China and Russia who hold-the-key now as they had been supportive of AT, in the last couple of years, while India has taken to its nemesis as Zamir Kabulov, the Russian President Vladimir Putin Special envoy, did not include India in the meeting of ‘extended-troika’ at Doha as he stated that India holds no influence with AT.

Lets see what all it takes after the new President of Afghanistan is sworn-into.

As many as 573 Afghan civilians were killed and 1,210 maimed, according to the UN report

Muslim world lags behind in every sphere of life: Dr. Zubair Zafar Khan