India, a leading growing economy in South Asia, has been one of the fastest growing countryover the past decade in terms of GDP growth and  macroeconomic management. According to IMF World Economic Outlook (April-2016), GDP growth rate of India in 2015 was 7.336% and India is 9th fastest growing nation of the world.In 2014, India was 14th fastest growing nation of the world with GDP growth rate of 7.244%. Average growth rate from 1980 to 2014 stands at 6.27%, reaching an all time high of 10.26% in 2010 and a record low of 1.06% in the 1991. The Union Budget2015-16 (presented in February 2015) with its announced push towards infrastructureinvestment, amidst continued fiscal consolidation, adds to the realism of the scenario.

High inflation,widening fiscal deficits with a decline in domestic saving and interest rates are the present concerns to the present Modigovernment.The immediate priority is to bring down inflation levels  as observed in 2004-08, and finding an alternative source of  funding for mammothic projects in infrastructure and development. India’s solution may lie in finding alternatives to conventional financing and investment that can address   the bourgeoning deficit.

Islamic banking and  finance is one of the fastest growing industry in the last decade and industry with assets of trillions of dollars under its management. Today some more than 500 Islamic banks and financial institutions are operating in and outside the Muslim World. The global Islamic finance industry has been in an upward trajectory, evidenced by its assets’ double-digit compound annual growth rate (CAGR) of 17% between 2009 and 2013. The industry’s assets are estimated to be worth USD1.87 trillion as at 2014, having grown from USD1.79 trillion as at end-2013(IFSB 2015). 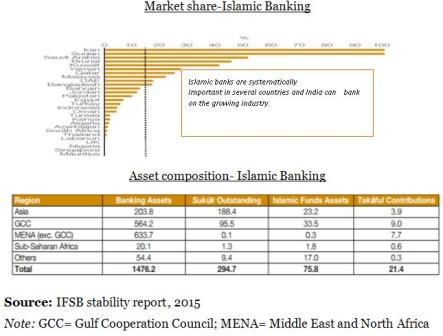 An estimated USD 1.5 trillion in capital moves around the Middle East, largely from higher oil prices. At the same time, many Middle Eastern investors are eager to capitalize on Asia’s spiraling growth. The regulatory challenges and the government’s unfocused approach to Islamic Finance is working against India’s potential to become a favored investment destination. The country’s 12th five-year plan for the period 2012-2017, targets on removing some of these roadblocks and creating a framework for private-sector participation, but it will rely on the ability of India’s leaders to execute these plans, it added. In its draft 12th five-year plan for 2012-2017, the government proposes to invest USD 1 trillion to upgrade infrastructure–almost double that of the earlier plan, which ends in March 2012.

Islamic bonds(sukuk)  successfully financed long term projects globally and be seen as a cheap alternative to raise finance. Sukuks(Islamic bonds) seen  as an alternative source of finance to fill the Indian economic deficit. 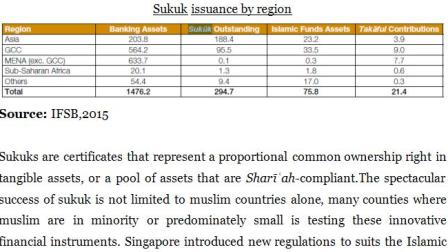 Sukuks are certificates that represent a proportional common ownership right in tangible assets, or a pool of assets that are Shar??ah-compliant.The spectacularsuccess of sukuk is not limited to muslim countries alone, many counties where muslim are in minority or predominately small is testing these innovative financial instruments. Singapore introduced new regulations to suits the Islamic banking system by waving of stamp duties for real-estate financing, and a 5 % concessionary tax rate for Islamic financing.

Similarly, UK is planning to start issuing Islamic bonds (sukuk) in its way to attract more funds and raise capital and relaxed rules on Islamic banking and finance.Moreover, UK, Ireland, Germany, France, Canada, Australia have also introduced a new set of regulations to facilitate the growth of this financial system, since they have a desire to obtain a leading position in this rapidly growing financial market.

India offers a lot of potential for these alternate investments and needs to amend regulations to allow Shariah based investing to enable growth.

As an initial step, it is essential to develop proper legislation and regulation, as well as the supporting infrastructure, including the necessary skill set. Future areas of research include measuring better Islamic banking development and assessing the impact of Islamic banking on inequality and social development.

Investments can be allowed on a “pilot” base  in the form of Sukuk in India. Sukuk financing is set to continue providing Indian issuers with non-bank alternatives to longer-term funding. Sukuks have confirmed their viability as an alternative means to mobilise medium to long-term savings and investments from a huge investor base. Sukuk are also playing significant role in India to help issuers and investors alike to participate in major projects associated with infrastructure such as airports, bridges and power generating facilities.

(Amjad Suri is a  UAE based financial consultant)