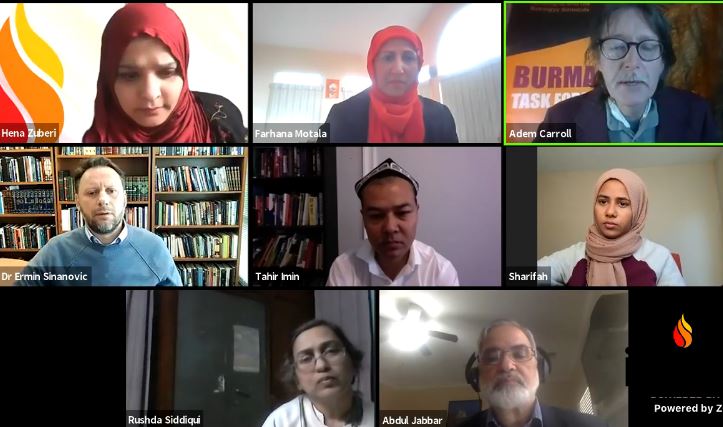 New Delhi : “We are often told of the stages that the genocide process involves, but it is very alarming that India has been undergoing persecution at all these genocidal stages in different areas of the country,” said Zahir Adil, lead of Justice For All’s Save India From Fascism project.

Justice for All (JFA) held a virtual panel at the 3rd Ministerial Conference to Advance Freedom of Religion or Belief on Wednesday (Nov.18, 2020). Hosted by the government of Poland, the panel was titled: “Islamophobia leads to Genocide: A case of Burma, China, India and Kashmir.” The Ministerials involve religious leaders from around the world, and are an initiative of the US State Dept.

Hena Zuberi, Projects Director for JFA, said that Islamophobia is a “force of evil” that has caused devastation across the world. “Through our work on the Rohingya and Uyghur genocide, we see similar warning signs in India. This side event at the Ministerial on Religious Freedom tied the threads from what occurred in Bosnia to what is happening in Burma, China, India and Kashmir,” she stated.

To elaborate the relations between Islamophobia and genocide, Dr Ermin Sinanovich of Shenandoah University, said that the picture of Islam that the Serbian political discourse and the regional orientalists presented in the 1980s actually paved the way for the genocide and ethnic cleansing of Muslims that took place in Bosnia in 1990s and later on in Kosovo.

Many of those who led the genocide in Bosnia were college and university professors. Many of them were psychologists and psychiatrists. They used their knowledge of how to manipulate the masses in order to create an “anti-Muslim frenzy”, Dr. Sinanovich said.

Rushda Siddiqui, a senior office bearer of the National Federation of Indian Women, pointed out the challenges posed by the idea of Hindutva in India. She said the aforementioned idea was actually promoted due to Muslims [anti-Muslim bigotry]. She added that in 2014 the mandate was given to the party, which is focused on ensuring that there is no Muslim in the country. If they live here they either will have to accept the mainstream narrative or they will have come to Hindu fold.

On the Citizenship Amendment Act, she said that that the policy is meant to “delegitimize and decitizinise” Muslims. The process is yet to start but the law has led to violence in several parts, including New Delhi, Gujarat and West Bengal.

Dr Abdul Jabbar from Kashmir shed light on issues and problems faced by the residents of Indian-administered Kashmir. He extensively discussed how Kashmiris are being classified and dehumanised. He said that life in Kashmir is not easy due to the presence of armed forces in every nook and corner.

Tahir Imin, an Uyghur researcher, said, “We are at the final stage of genocide”. He said Uyghur women are being Sterialised and the entire ethnic population is being transformed into mainstream Chinese identity. He added that three to four million Uyghur Muslims are being forced to work as slaves in Chinese concentration camps.

Sharifah Shakirah, a Rohingya activist and Adem Carroll, UN liaison for JFA also spoke at the meeting organised by the JFA.

JFA is a multi-project Human Rights and Advocacy organization. It’s current projects include Burma Task Force, Save Uighur, Kashmir Action and Save India From Fascism.