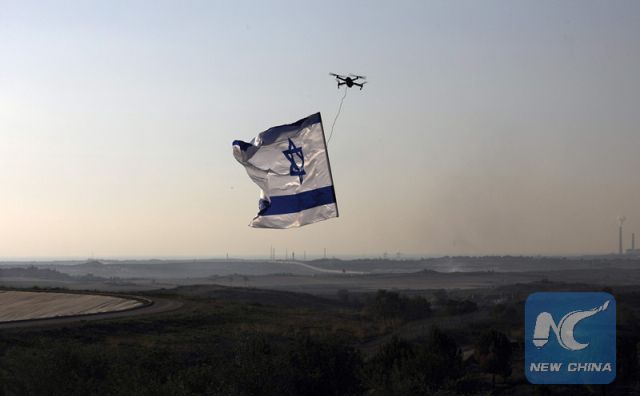 Jerusalem : The Israeli air force launched an air strike on Gaza, amid a new round of escalation between Israel and Gaza militants, and tension with Iran.

A military spokesperson confirmed in a statement that fighter jets struck 15 sites in Gaza, saying the attack on Sunday night was a response to the firing of rockets towards Israel earlier, Xinhua news agency reported.

In the Israeli attack, the air force hit a rocket and weapons manufacturing and storage facility in the central Gaza Strip and other sites in the region of Khan Yunis in the southern Gaza Strip, the spokesperson said.

In addition, an urban warfare training facility was bombed in the neighbourhood of Shuja’iyya, and infrastructure belonging to the Hamas naval forces was struck too.

Since Saturday night, rocket fire exchange from Gaza and Israeli air strikes were resumed after a few days of calm, threatening to break a de facto cease-fire that halted mutual fire last week.

Also on Sunday, Israel struggled to put out fire caused by kites with incendiary devices launched by Palestinians in the besieged enclave.

A military spokesperson said in a statement on Sunday that exercises were planned in advance as part of the military’s routine training plans to maintain the preparedness and fitness of the forces.

The exercise will last through Wednesday.

“As part of the exercise, a large movement of ground troops, vehicles, air force aircraft and helicopters will be felt,” the statement read.

The other exercise, which already began on Sunday morning, is being carried out by the air force, and will continue until Thursday.

The exercise involves all Israel’s air force bases, according to the statement.

“As part of the exercise, a large movement of aircraft over the country’s skies will be felt, explosions will be heard, and sirens will be activated for training purposes in air force bases and their vicinity,” the spokesperson said.

The exercises come amid peak tensions along the security fence separating the Gaza Strip and Israel, where Israel has carried out dozens of airstrikes on Hamas and Islamic Jihad targets in Gaza, while the Gaza militants fired dozens of projectiles at southern Israel.

At least 122 Palestinians have been killed by Israeli fire since March 30, the first day of the ongoing Palestinian “Great March of Return” rally against Israel’s crippling blockade since 2007 and the US embassy move to the disputed holy city of Jerusalem.

The escalation came after Israeli forces shot and killed at least 122 Palestinians since the demonstrations started a months ago, most of them killed during protests in the vicinity of the fence to protest the blockade imposed by Israel and the inauguration of the new US embassy in Jerusalem.