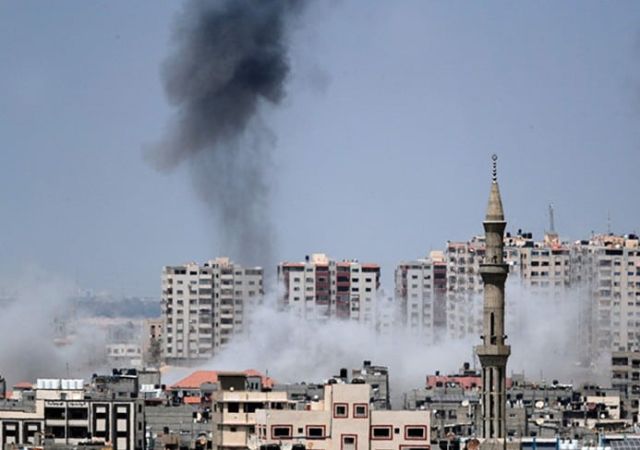 Jerusalem : Israel launched a massive airstrike on the Gaza Strip on Tuesday, hitting 35 targets and a cross-border tunnel, the latest in a back-and-forth exchange of fire after Palestinians launched mortars from Gaza into Israel.

The Israeli military in a statement said the airstrike was in response to the barrage of 28 mortar shells that Gaza militants fired at Israel on Tuesday morning. The attack from Gaza caused no major damage except for a man who was slightly injured in the hand, it said.

The airstrike was carried out by Israeli fighter jets and aircraft which struck over 35 targets at seven terrorist sites, according to the statement.

It further said that the Israeli Defence Forces targeted six military compounds, munition storage warehouses, naval targets and terrorist headquarters and the Army also hit “an offensive terror tunnel” belonging to Hamas in the area of the Kerem Shalom crossing near Rafah.

The tunnel started within the Gaza Strip, crossed into Egypt’s Sinai Desert before stretching into Israeli territory, it added.

But media reports from Gaza said what was hit by Israel was in fact “a smuggling tunnel” used to transfer goods to the besieged Palestinian enclave.

Also, Gaza’s Ministry of Education reported that a school was badly damaged by Israeli airstrikes in the central Gaza Strip, where high school students were taking final exams, but with no injuries.

The latest escalation began on Sunday after an Israeli tank killed three Palestinian members of the Islamic Jihad militant group, in response to an explosive device placed on the Gaza-Israel boundary fence.

Tensions have increased along the Gaza-Israel boundary since the start of the Great March of Return protests on March 30. Since then, some 121 Palestinians have been killed by Israeli gunfire, the vast majority during demonstrations along the boundary fence.