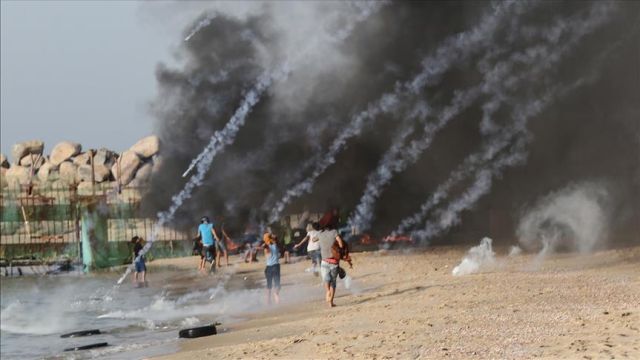 Ramallah, Palestine: Near Jerusalem on Wednesday dozens of peaceful Palestinian protestors suffered suffocation by teargas bombs lobbed by Israeli soldiers, according to eyewitnesses.

Israeli forces, the eyewitnesses said, threw teargas bombs at the protestors, leaving dozens of them suffocated, including reporters.

The protestors, who were demonstrating in solidarity with the residents of the Palestinian Khan al-Ahmar community, launched a peaceful march from the village of Abu Dis near Jerusalem towards the “Jerusalem Gate” village, which Israel established as an alternative for Palestinian residents of Khan Al-Ahmar in preparation for their forcible displacement.

According to the eyewitnesses, the Palestinian protestors had managed to enter the Jerusalem Gate village, and spray-painted and chanted slogans against the Israeli occupation and the eviction of Khan al-Ahmar.

On Sept. 5, Israel’s Supreme Court approved the demolition of Khan al-Ahmar and the eviction of its inhabitants.

Israel seeks to expel some 10,000 Bedouin residents of what is known as the E1 Zone, which sits on 15 square kilometers of land (5.8 square miles) in eastern Jerusalem.

The planned demolition is meant to make way for a series of Jewish-only housing units linking Jerusalem to the Maale Adumim settlement.

If carried out, the plan would effectively cut the West Bank in two, preempting the possibility of a territorially contiguous Palestinian state.