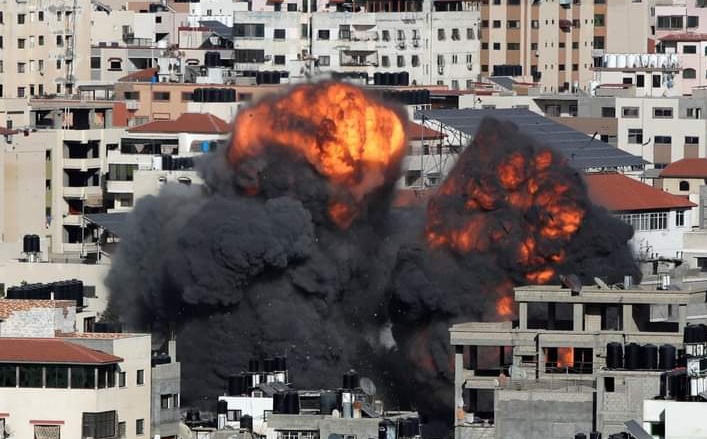 By Dr M A Mufazzal

In the words of Al Jazeera’s political analyst Marwan Bishara, “Israel is a colonial war machine that never sleeps” reflects the sustainability of the colonial project of Israel which takes though, a modern shape in the course of time but never failed to subject Palestinians to military occupation, land dispossession, desecrations and destructions.

The slits of the “Nakba” are still unstitched even more than 70 years later, as Israel never let over five million refugees go back to their homes – while assuring permanent settlement and citizenship to anyone who demonstrates Jewish ancestral link. This mass catastrophe was, in fact, inflicted for ethnic cleansing of Palestinians from their homeland as the Israeli historian Ilan Pappe, substantiate by saying that “the forced displacement of Palestinians amounts to ethnic cleansing.”

Colonization perpetuates the cleansing and repression of native peoples through appropriation, dispossession and desecration which often employs the techniques of justifying the action of appropriation. The mass dispossession of “Nakba” and the lateral stemming events of displacement of Palestinians followed by the settlements make it, by the “logic of elimination”, a classical case of settler colonialism.

In his book co-authored with Noam Chomsky the Israeli historian Ilan Pappe maintains, “The tale of Palestine from the beginning until today is a simple story of colonialism and dispossession, yet the world treats it as a multifaceted and complex story — hard to understand and even harder to solve”. The systematic and sustained physical and symbolic elimination of native Palestinians shows that the colonial War Machine of Israel never takes the nap.

Enactment of laws by the colonizers serves as a tool of legitimation, appropriation, and dominance. Like any settler colonial paradigm Israeli colonial settler project instrumentalizes the laws as a powerful appropriating tool to facilitate their settler colonial project and as a legitimacy to be drawn on. This process in itself a paradigm in which colonization could take place: “physical occupancy and legalized claim overlapped as expressions of colonizing”

Since 1967, Israel has been tirelessly involved in engineering the demography with a Jewish majority in the city by employing a range of illegal measures and policies including but not limited to: a state-sponsored settler project; bulldozing the houses; the revocation of residency rights of Palestinians; annexing East Jerusalem; the building of the apartheid wall; the constant imprisonment of Palestinians under the charge of being political; traumatizing and pushing Palestinians to flee their land; the de-development of the Palestinian economy; the discriminatory policies against Palestinian citizens of Israel that leave them bereft of ability to purchase and lease land; and the non-ending Settlement-Expansion Plans of Israeli government and forced evictions through dubious “legal process”.

The fresh spat between the two sides also erupt out of a plan by Israel to oust number of Palestinians from their homes they have lived in for decades in Sheikh Jarrah in occupied East Jerusalem, giving them to Jewish settlers. Israeli Jews claim that the number of Jewish families had lost their lands and properties during Nakba 1948 and they have their very rights to get the lost lands back. On the pretext of given argument, Under Israeli law Jews who can prove pre-1948 title can claim back their lands and properties in the city of Jerusalem. But ironically no similar law guarantees the repossession of the lands and homes that hundreds of thousands Palestinians have lost in West Jerusalem.

The situation has already well spiralled ahead of an Israeli court ruling, which was due to be delivered, on whether authorities would expel hundreds of Palestinians from the majority-Arab East Jerusalem neighborhood of Sheikh Jarrah and let Jewish settlers to overtake. Along with this verdict at the same time, thousands of far-right Israelis Israeli ultranationalists were due to hold annual Jerusalem Day provocative parade through Muslim majority areas in the Old City to celebrate Israel’s capture of East Jerusalem in 1967.

However, the verdict was postponed and the parade was rerouted, but by that point, the situation has already built enough to spark the clash and eventually the storming of al-Aqsa mosque compound by Israeli police triggered the fresh bloodshed.

In addition to it, a spat of communal violence was also erupted between Jews and Palestinians following a parade staged by hundreds of far-right Israelis down city streets of Lod chanting “death to Arabs”. As always with no meaningful intervention done so far by the international community, the conflict keeps intensifying and heading towards unknown.

The Palestinian presence in al-Aqsa Mosque poses a symbolic challenge to Israeli hegemony and appears to be the most significant obstacle to their settler colonial project.  The monstrous colonial war machine of Israel will continue ravaging until it legitimizes its complete control over entire lands including the holiest place in the region.