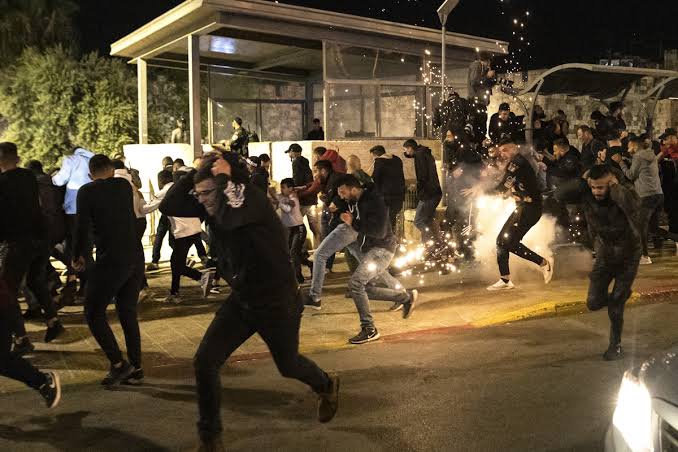 TEL AVIV – Hundreds of Israeli extremists launched attacks on Arab nationals on Wednesday in several cities across Israel, according to local media reports.

Clashes occurred between Israeli occupation forces and Palestinians in the central city of Lod, according to witnesses. Hundreds of extremists attacked homes belonging to Arab Israelis in Lod.

Israel imposed a curfew in the Arab-majority city of Lod on Wednesday after clashes erupted between security forces and Arab-Israeli Palestinians regarding tensions in Jerusalem and Gaza.

The city saw fierce clashes Tuesday between mourners and police during a funeral procession for an Arab-Israeli resident who was killed by an Israeli settler.

Prime Minister Benjamin Netanyahu later announced a state of emergency in the city.

Acre, Tiberias and Jaffa also have witnessed fierce clashes between the police and Palestinians, according to KAN.

Several Israelis were severely injured in clashes in Acre, according to the channel.

The death toll from the ongoing Israeli attacks in the Gaza Strip rose to 65, including 16 children, the Palestinian Health Ministry said late Wednesday.

It said five women were among victims, while 365 people were injured.

Arab Israelis are the Palestinians who managed to stay in their homes during the Nakba — forced exodus — of 1948 and later became citizens of Israel. They make up around 20% of Israel’s population.

They are centered in a group of Arab towns in central Israel known as the “Little Triangle” along with the Galilee (north) and Negev regions (south).

Tensions have been running high since an Israeli court last week ordered the eviction of Palestinian families from the Sheikh Jarrah neighborhood of East Jerusalem.

Israel occupied East Jerusalem during the 1967 Arab-Israeli war and annexed the entire city in 1980, in a move that has never been recognized by the international community. -AA

Syria: For 2nd time in a week, Israeli attack on Aleppo airport