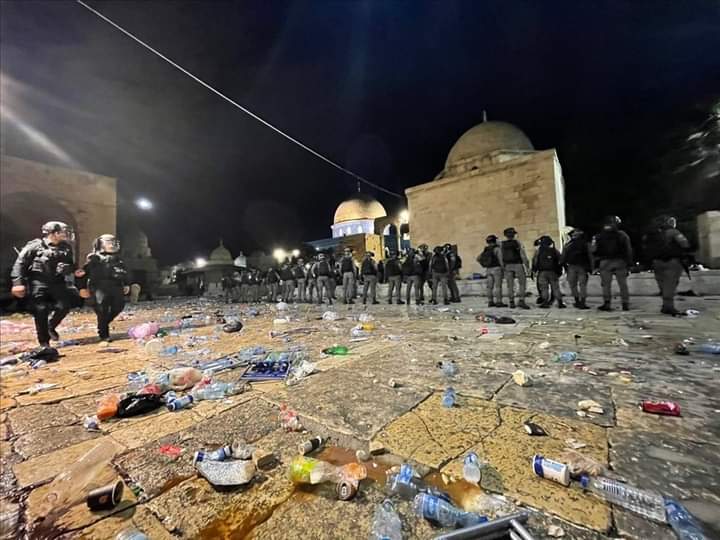 Some 53 Palestinians were injured in the clashes inside the Haram al-Sharif area, the Palestinian Red Crescent said in a statement.

Israeli police attempted to disperse worshippers inside the Haram al-Sharif via stun grenade and gas bomb, an official from the Jerusalem Islamic Waqf (religious endowments) told Anadolu Agency on condition of anonymity.

Meanwhile, clashes took place between Israeli security forces and Palestinians trying to enter Al-Aqsa through the Bab Al-Silsila, one of the gates to the mosque.

The intervention by Israeli police who also attacked young Palestinians in front of the Damascus and Es-Sahire gates of the Old City, caused panic among women and children.

Police allow for controlled passage through the gates of the Old City.

They continued their intervention at regular intervals against the Muslims in the mosque, while worshippers continued to perform Tarawih, special nightly prayers during the Muslim holy month of Ramadan.

Sheikh Omar al-Kiswani, the director of Al-Aqsa Mosque, called on Israeli police to halt their attacks and withdraw from the mosque courtyard.

Israel occupied East Jerusalem, where Al-Aqsa is located, during the 1967 Arab-Israeli war. It annexed the entire city in 1980 in a move never recognized by the international community-AA