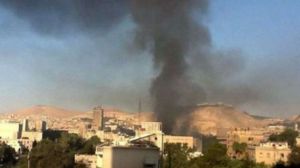 Israeli war jets launched two air strikes — one on a military training facility in southern Gaza that belongs to Islamic Hamas militants and another base in central Gaza Strip, Xinhua quoted security officials in Gaza as saying.

The officials said the noise of Israeli war jets and the explosions were heard by residents in central and southern Gaza.

There were no immediate report of anybody being injured or dead.

The airstrikes came as search for three teens, that Israel accuses the Hamas militant group of abducting, entered its third week.—-IANS