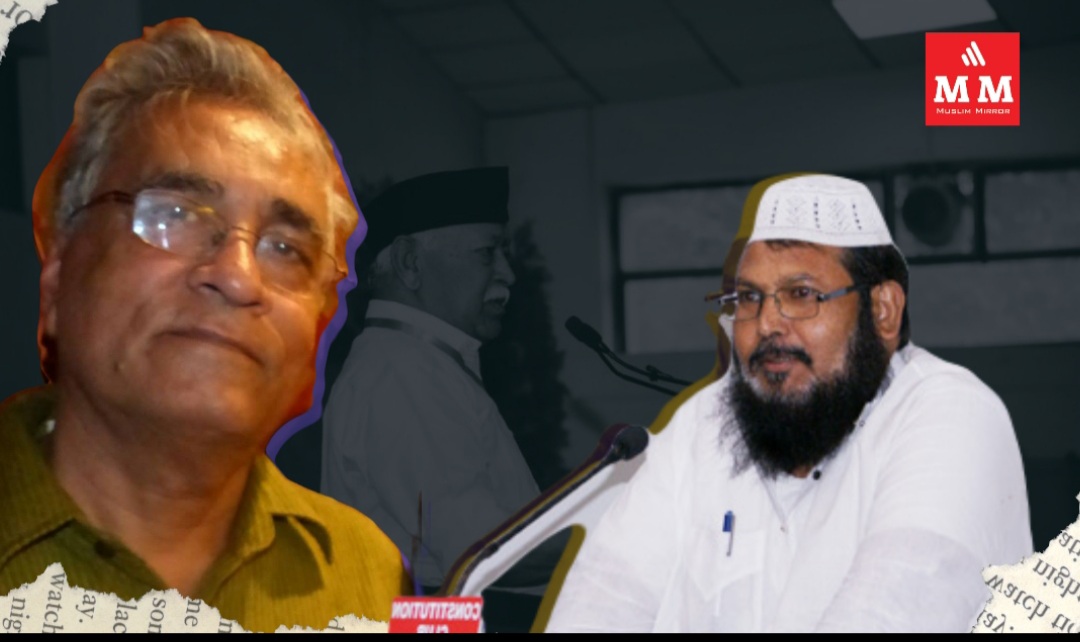 New Delhi: Reacting to RSS chief Mohan Bhagwat’s statement prominent experts on RSS have said that RSS is trying to gain a foothold among the Muslim masses, that’s why they’re making statements that seem to be in favor of Muslims.

RSS chief Mohan Bhagwat, on Sunday, said that the DNA of all Indians is the same and that those indulging in lynching are against Hindutva.

Reacting to the statement, former professor of Political Science at the Delhi University and author of several books on Hindu Nationalism, Hindutva and the RSS, Dr. Shamsul Islam said that before talking about Muslims, RSS should talk about their agenda about the majority and the politics of the country.

While quoting an excerpt from an article from the RSS’ mouthpiece, Organizer, which dates back to 14 August 1947 and reads “The people who have come to power by the kick of fate may give in our hands, the tricolour, but it will never be respected and owned by Hindus. The word three is in itself an evil, and a flag having three colours will certainly produce a very bad psychological effect and is injurious to a country,” Dr. Islam said that the RSS has no agenda for the Indian nation. Dr. Islam added that RSS is against the very idea of India.

He said that the RSS stood against the constitution of India after it was drafted. “In an editorial on November 30, 1949, Organizer, the RSS rejected the constitution because it talks of equality and demanded the archaic, anti-egalitarian ‘Manusmriti’— a book that’s against Hindu women and Shudras,” he said.

Dr. Islam, while citing VD Savarkar’s book Hindutva (1923) said that RSS doesn’t even consider Muslims and Christians to be a part of India. “According to Savarkar, people who are fair in color and speak Sanskrit are Indians only… interestingly most RSS members will also not be a part of the Sangh’s idea of India,” he said. “Hindutva is what Mohan Bhagwat is denying”
.
Dr. Islam said that he’d trust Bhagwat if he denounces Golwakalar’s books which call for a holocaust of Muslims and Christians. “…but they won’t do it, these books are the Bibles for RSS cadre,” he said.

“Bengal and Tamil Nadu elections have shown that Hindus are not falling prey to the vicious ideology and now elections are going to be held in the Hindi belt…they want Muslim votes, it’s all a gimmick,” Dr. Islam said.

“The RSS killed Mahatma Gandhi, they abused Bhagat Singh, Rajguru, Sukhdev and Bhim Rao Ambedkar when they were alive, now they eulogize them…it’s all hypocrisy,” he added.

Maulana Abdul Hameed Nomani, who wrote several books on RSS ideologues and its ideology said that Bhagwat’s statement is right but the implementation doesn’t seem to be happening anytime soon. “We’re a free country, everyone is a part of it, nobody can exclude the existence of others from the idea of India,” he said.

Maulana Nomani said that statements like these are mere words and unless a law is formed in the country, it doesn’t make any sense. “There shouldn’t be a contradiction in precept and practice,” he said.

Earlier, Member of Parliament and chief of All India Majlis-e-Ittehadul Muslimeen, Assadudin Owaisi had said RSS and Hindutva ideology is responsible for radicalization of the majority community.

The National President of the Social Democratic Party of India, M.K. Faizy also criticized the RSS chief’s statement and said that the statement should be discussed as a prime agenda in RSS itself and needs its retrospection.

Faizy said that Bhagwat’s affirmation of “Don’t get trapped in the cycle of fear that Islam is in danger in India” needs to be checked in the Sangh circle itself.
“Bhagwat is well aware of Golwalkar theory of ‘Hindutwa’ which directs the Sangh members to treat Muslims as enemies and evils that need to be eliminated from the country. This ideology of RSS has been taught to Sangh members till today in its training camps, Shakhas, literature, speeches, etc. Arms training and brainwashing camps are taking place across the country by the RSS to instill Golwalkar theory in the minds of RSS workers and for its implementation,” he said in a statement.

“Even ‘Hindutwa Politics’ survives and thrives on the Golwalkar theory of communal polarization and demonization of Muslims,” Faizy added.

Hate crimes against Muslims in India have reached new heights, with reports of Muslims being assaulted, insulted, and lynched in the news almost every day.

Although, there are no official figures, at least 133 cow-related attacks were reported in India since 2012, leading to 50 deaths and more than 290 injuries, according to a FactChecker.in database.

In March 2021, the US Department of State released a report, criticizing India for violations of religious freedom; crimes involving violence and discrimination targeting members of minority groups including women based on religious affiliation or social status, etc.

Likewise, in the Freedom House report for 2021, India lost its status as ‘free’. “Political rights and civil liberties in the country have deteriorated since Narendra Modi became prime minister in 2014, with increased pressure on human rights organizations, rising intimidation of academics and journalists, and a spate of bigoted attacks, including lynchings, aimed at Muslims,” the report read. “The decline only accelerated after

Modi’s reelection in 2019.”
The Human Rights Watch (HRW) also accused the Indian government of adopting laws and policies that “systematically discriminate against Muslims and stigmatize critics of the government.”