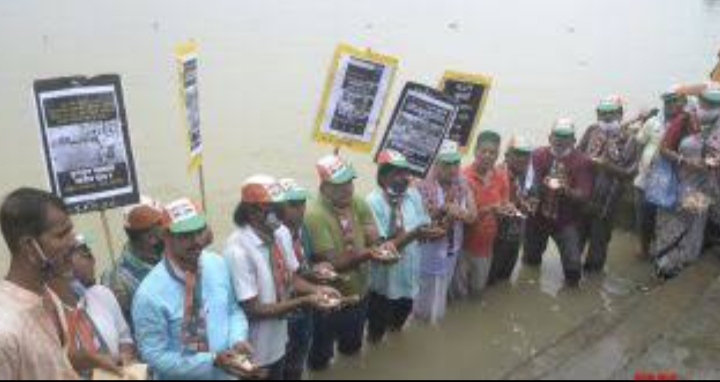 LUCKNOW:  It is now ‘Ghar Vapsi’ time in the Uttar Pradesh Congress unit.

Priyanka Gandhi Vadra, party general secretary, during her recent three-day visit to Lucknow, reportedly directed UPCC president Ajay Kumar Lallu to ensure the return of those party workers, especially veterans, who had been shoved out of the party.

Immediately after her return to Delhi, Lallu withdrew the expulsion of three senior leaders –Nek Chand Pandey, Bhudhar Narain Mishra and Rajendra Singh Solanki — and welcomed them back into the party’s state headquarters with bouquets and smiles on Tuesday.

AICC secretaries Dhiraj Gurjar and Rohit Chaudhary said that these leaders will play an important role in strengthening the Congress in future,” said UPCC spokesman Ashok Singh in a press statement.

These three veterans were a part of the group of ten senior leaders who had been expelled from the party in November 2019 after they reportedly held a meeting on Nehru Jayanti which was termed as an anti-party activity.

“Ten leaders had gathered to celebrate the birth anniversary of former prime minister, Jawaharlal Nehru and Indira Gandhi and also to discuss the prevailing political situation. I do not think there was anything anti-party in this. One of the expelled leaders, Ram Krishan Dwiwedi, passed away last year. We repeatedly sought an appointment with Sonia Gandhi, Rahul Gandhi and Priyanka Gandhi but were denied the same. We were asked to tender an apology.

Why should we tender any apology when we did not indulge in any indiscipline?” said expelled leader, Haji Siraj Mehndi.

The expulsions led to a vertical divide in the party and paved the way for an old-versus-young war within the Congress.

Soon, majority of the senior party leaders withdraw from active participating in Congress activities and relatively unknown leaders took over the reins.

According to party sources, Priyanka, who was apparently kept in the dark about the festering resentment in the party ranks, has now asked the state leadership to withdraw expulsion of old guards and reach out to all veterans in the party.

“She said that when she asked for induction of young blood in the Congress, she certainly did not mean the ouster of old timers. She said that she wanted experienced leaders to coexist with young leaders,” said a party source.

Ajay Kumar Lallu, when asked, said the Congress was reaching out to all the veterans and all those committed to the party would be welcomed. — IANS

As proud Indians, we want to bring the best to India: Consulting perfumer Abdulla Ajmal