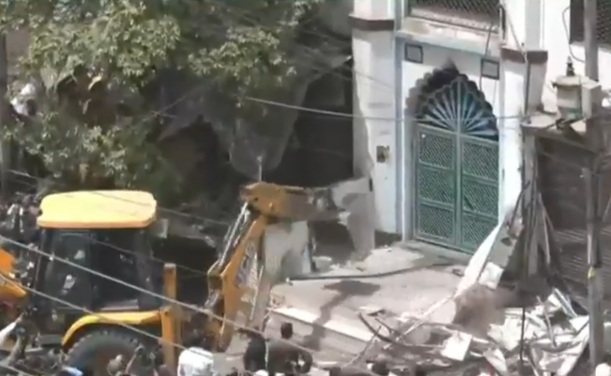 After the bulldozers rolled into the Jahangirpuri area of New Delhi at around 10 am on Wednesday to begin an anti-encroachment drive, the Supreme Court ordered to stop the drive and ordered status quo on the matter till its hearing on Thursday.

However, authorities have continued demolition in the area.

The demolition drive comes after communal clashes broke out in the area during the celebration of Hanuman Jayanti.

Gupta had alleged those involved in the riots had the protection of the local MLA.

Ahead of the demolition drive, security was beefed-up across the city, especially in Jahangirpuri.

A total of 12 companies (around 1,250 jawans) of the CRPF have been deployed in the city in two shifts, most in and around Jahangirpuri.

North Delhi Mayor Raja Iqbal Singh said that police deployment was requested to avoid any mishap during the anti-encroachment drive in Jahangirpuri.

On April 10, after the violence during the Ram Navami procession in Madhya Pradesh city, the district administration demolished properties of the people.

At least 50 houses and other properties across four locations in Khargone were demolished.

Several videos of razing down shops and bulldozing the other buildings surfaced on social media.

Most of the properties demolished in the drive belonged to Muslim families.