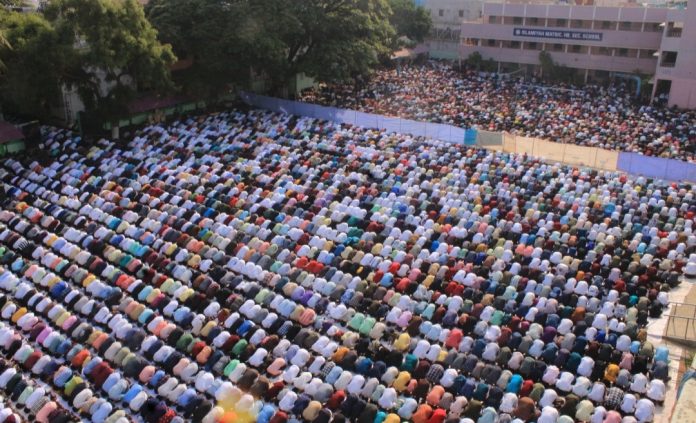 Eid-ul-Fitr is the time for feasting, rejoicing and thankfulness. Yes, the Muslims across the globe celebrate the culmination of month-long fast with gaiety and religious fervour sharing their happiness with people belonging to different faiths. And this year, the focal point during the special prayers was communal harmony, country’s progress and global peace.

At a mammoth congregation organised by Coimbatore branch of Jamaat-e-Islami Hind (JIH) at Karumbukkadai Islamiya Matriculation School grounds in the city, Moulana Moulavi Mohamed Ismail Imdhadhi after the special prayers underlined the need for Universal brotherhood, togetherness and peaceful co-existence among all people cutting across communal lines.

Special dua was made by Pesh Imams during the Eid prayers for peace in the strife-torn Ukraine besides Palestinians, who are caught in Israeli conflict and the Muslims facing hardships in different forms in different corners of the globe. Both young and old, including men and women besides children, enthusiastically took part in the special prayers.

It may be noted that the practice of dawn-to-sunset fasting during the holy month of Ramadan (Sawm) is one of the five pillars of Islam. Muslims believe that it was during the month of Ramadan that Holy Quran was revealed to the Prophet Muhammad (PUBH) and it is said the first Eid al-Fitr was celebrated in 624 CE by the Prophet Muhammad and his companions after their victory in the battle of Jang-e-Badar, a turning point in Muhammad’s struggle with his opponents among the Quraish in Mecca during in the early days of Islam.

Moreover, the key element of the Eid celebrations is giving away money to the poor (known as ‘Zakat’). For many Muslims, Eid-ul-Fitr is a festival to show gratitude to Almighty for the help and strength he gave them throughout the month of Ramadan to help them practice self-control. Coimbatore JIH president P S Umar Farook alongwith Public Relations Secretary A Abdul Hakkim made elaborate arrangements for the Eid prayers at the school premises.