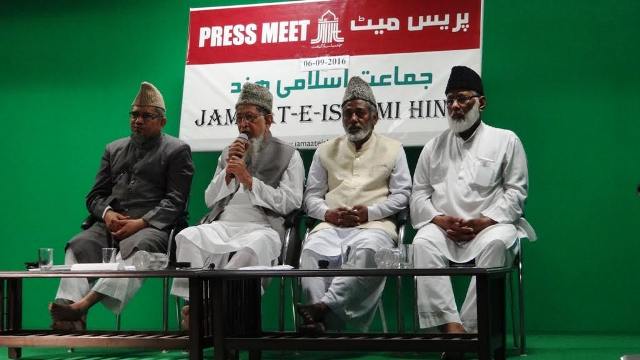 New Delhi, 6 Sept : With an aim to counter the growing politically-motivated communal tension in different parts of the country, Jamaat-e-Islami Hind is mulling to set up Dharmik Morcha (religious front) at the national and state levels. The Dharmik Morcha will comprise leaders from different religious communities including Hindus and Muslims. Jamaat made an announcement regarding the move at its monthly press conference here on Tuesday.

“Apart from the Sadbhavana Manch which Jamaat is establishing in its all 1200 units spreading across the country, we have decided to set up a Dharmik Morcha also. This front will have leaders from all prominent religions like Hindus, Muslims, Christians, Sikhs and Jains,” announced Maulana Syed Jalaluddin Umari, Ameer (President) of Jamaat-e-Islami Hind during the press conference held today at Jamaat’s headquarters.

While Sadbhavana Manch will have eminent persons including social and human rights activists of the locality, the Dharmik Morcha will have only religious figures.

“The objective of the campaign was to reach out to the people of the country and remind them of the importance of nurturing the social fabric of our country and preserving its communal harmony which is under threat by some communal and anti-social elements,” said Maulana Umari who was accompanied with Jamaat’s vice president Nusrat Ali, Secretary General Mohammad Salim Engineer and Secretary Mohammad Ahmed.

Giving details about the 15-day campaign, Mohammad Salim Engineer said that about 25 lakh people were directly reached through more than 10,000 public events including conferences, press briefing and cornor meetings. Through the social media platforms of Jamaat, around 15 crore people were reached.

Jamaat’s vice president Nusrat Ali had recently led a delegation to Nuh district in Haryana where last month, one Muslim couple was brutally killed and two young girls were gang-raped allegedly by robbers.

Talking to pressmen, Nusrat Ali said it seemed the crime was planned to provoke Muslims for violence, but the local Muslims showing wisdom controlled the situation. Jamaat delegation had visited the injured people at hospital, attended a Mahapanchayat of Mewati Muslims and also visited the homes of the affected people. Jamaat leaders assured all help to the victims.