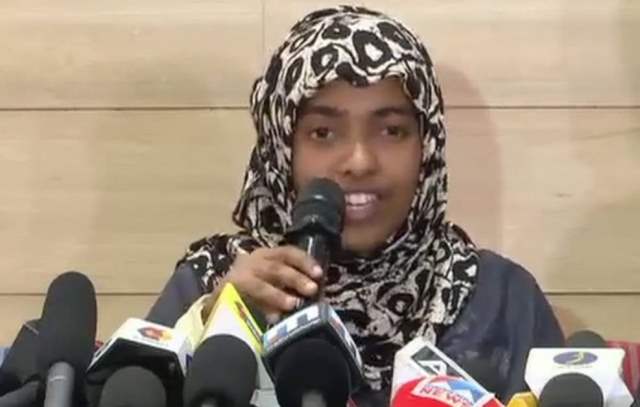 Kozhikode:  Kerala-based Hadiya, who was being projected by media and intelligence agencies as ‘victim of LOVE JIHAD’ has given a big jolt to the conspirators of  LOVE JIHAD  and  punctured  the conspiracy theory in her own style.

Addressing the media persons on Sunday she said   ‘I grateful to the Supreme Court for allowing me to reunite with my  husband.’

Days after the apex court set aside a Kerala High Court order annulling her marriage with a Muslim man, Hadiya told reporters that the order was one that gave freedom to her to stand by a faith which she believed was right.

No other person in the country should experience the pain and suffering like the one she underwent, Hadiya said.

Flanked by her husband Shafin Jahan, Hadiya said she got freedom and justice from the apex court and thanked all those who stood by her during the legal battle.

“My legal struggle lasted roughly for two years and the six months I spent with my parents were horrible. I was literally under house arrest. I lost two precious years of my life. I don’t think my parents would want to harm me but they were under the influence of some anti-national forces, they are using them (parents) for political benefits,” she added.

Narrating her experience at her house, Hadiya said all those who visited her wanted her to return to Sanatan Dharma.

The apex court had on March 8 set aside a Kerala High Court order annulling her marriage to Jahan.

Hadiya is pursuing her mandatory house surgeon internship at the Sivaraj Homeopathic Medical College and Research Institute in Tamil Nadu’s Salem district for completing her Bachelor in Homoepathy Medicine and Surgery (BHMS) course.

The apex court had in August last year asked the National Investigation Agency to probe the case of conversion and marriage of Hadiya, as the agency claimed a “pattern” was emerging in Kerala.

The matter came to the fore when Jahan had challenged a Kerala High Court order annulling his marriage with her and sending the woman to her parents’ custody.

On November 27 last, the Supreme Court had freed Hadiya from her parents’ custody and sent her to college to pursue her studies, even as she had pleaded that she should be allowed to go with her husband.

The high court had in May last year annulled the marriage terming it as an instance of ‘love jihad’, following which Jahan had approached the apex court.

After returning from Delhi on Saturday Hadiya stirred up a controversy by lashing out at two Muslim organisations Jamaat-e-Islami and Tarbiyyath which  didn’t support her in  fulfilling her will to embrace Islam.

“Both Jamaat-e-Islami and Tarbiyyath refused to help me when I approached them with my desire to embrace Islam. It was only PFI  which came out in my support and stood by me and helped us fight the case legally in the apex court,”

When I decided to embrace Islam as my religion, I approached a lot of Muslim bodies to help me. Even when my issue became a controversy, these Muslim bodies joined my criticisers,” she told reporters after calling on the Popular Front of India (PFI) leaders here along with her husband Shafin Jahan.

Referring to that controversy Hadiya’s  Husband Shafin Jahan  told MuslimMirror.com that  “there should be no more controversies over  it , but the fact is that Jamat e Islami didn’t give any help to Hadiya when she needed .

He also told that now many Muslim organizations have offered their support to us including Jamat e Islami.

Its to be noted that PFI (Kerala state unit) appealed to the masses to donate generously  to fight the  battle legally in Apex court , and within half an hour after Friday prayer its cadres  collected over 80 lakhs rupees from across the state .