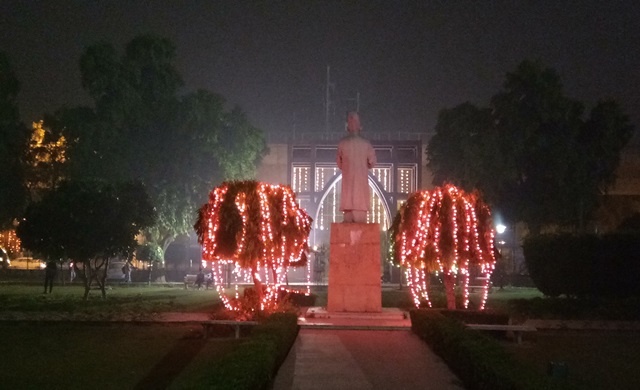 Thursday, 13 August, two days before the 74th independence day, The Times of India reported that Jamia Millia Islamia (JMI), a Central University in the southern part of New Delhi, has “bagged the first spot among all central universities in the country” in government rankings released by the Ministry of Education. For the Jamia Biradari (fraternity) it came as a Big Big Big news. In its history of hundred years, this is probably the first time the institution has reached the highest position among the central universities in India. Congratulatory messages filled the inboxes.

Despite the prevalent gloomy environment due to the ongoing global corona pandemic, a jubilant mood could be easily sensed through the messages exchanged among the alumni, staff and students. According to the news, with a score of 90 percent, Jamia secured the top spot in central university rankings by getting ahead of Rajiv Gandhi University of Arunachal Pradesh (83 %), Jawaharlal Nehru University (82 %) and Aligarh Muslim University (78 %), the latter two being among top ranked universities for decades.

As internals many of us knew that JMI had been doing extremely well for the last fifteen years or so especially since the time Prof Mushirul Hasan (1949-2018) became its 12th Vice Chancellor. While his predecessors ensured that the university land was freed from encroachments, Hasan used his academic weight, wider contacts and administrative acumen not only to build its infrastructure but also to introduce a number of new academic programmes and involve some of the best academicians in getting the desired outcomes. His efforts paid off and it became one of the most happening campuses in the country with an intellectually stimulating ambience.

When Prof Talat Ahmad became the VC of Jamia, he started from where Prof Hasan’s successor Mr Najeeb Jung had left. Prof Ahmad ensured that the campus remained full of academic vibrancy. His term, however, came to an abrupt end. The present tenure of Prof Najma Akhtar has added another interesting dimension to the historic institution. She is its first female VC, something which has not been achieved by a number of academic institutions in the country.

Being born in 1920, this is the centenary year of Jamia Millia Islamia. The preparations for the centenary celebrations had begun last year with a host of academic and semi-academic programmes. The faculty, students, alumni and the wider Jamia fraternity were gung-ho about making it a historic year. While this was there, a nation-wide movement erupted against Citizenship Amendment Act and National Register of Citizens which became synonymous with students protests, making a global impact. Jamia was leading it from the front which led to a series of unhappy incidents including brutal police action against students inside the campus on 15 December last year. Apart from students being injured, some of them critically, the university’s central library and its old library and reading rooms were damaged and subsequently closed. Just a few days after re-opening the library in March the country went for a long lockdown because of spread of coronavirus with special notices to all academic institutions to remain closed till further order. The order is yet to come as cases of Covid-19 continue to wreak havoc and cause death.

Earlier, there were reports of university rankings like NIRF in which Jamia kept on improving. However, the latest ranking has made it occupy the top most spot among central universities, making the wider Jamia fraternity bask in its past glory and feel proud about and rejoice its present enhanced status.

It is worth noting here that the history of Jamia is full of stories of the eventful years of British tyranny and the revolt of the Indian majority against it. Its founders played key role in the country’s liberation movement. They were joined and supported in this struggle by great leaders like Mahatma Gandhi, Shaikhul Hind, Hakim Ajmal Khan, Maulana Mohammad Ali Jauhar, Dr Mukhtar Ahmad Ansari, Maulana Abul Kalam Azad, Pt. Jawaharlal Nehru, Jamnalal Bajaj. The heroic accounts of the dual struggle to continue the fight against the British and to keep planting new seeds and nurturing a new generations of the youth to serve the society is the subject matter of history books. And, Jamia has succeeded to carve a niche for itself there. It has always promoted education with a nationalist spirit to serve the cause of the country.

At its centenary year, when hopes of celebrating the hundred years of its achievements are still a far cry, the reaching of Jamia Millia Islamia on top of the latest university rankings is the greatest achievement. The country and Jamia Biradari must celebrate it.

(Manzar Imam is a Ph.D. Scholar at the MMAJ Academy of International Studies, Jamia Millia Islamia)