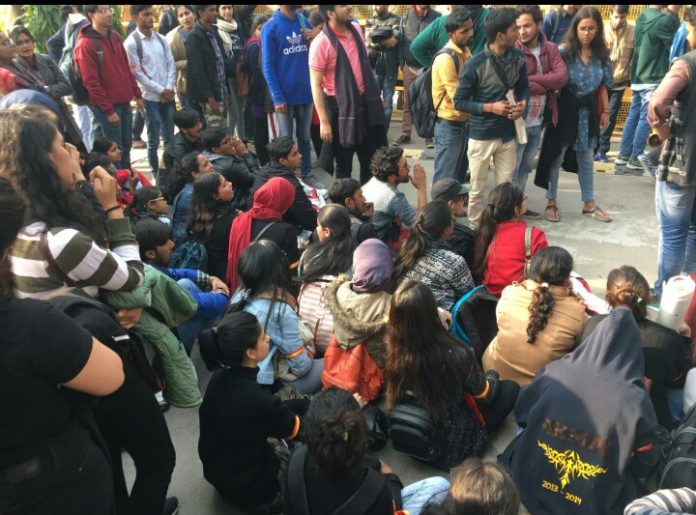 “We want justice. Our HoD has been alleged of sexually harassing several students. Many more are turning up,” said one girl student leading the protest.

Another student wishing not to be named said that ‘the harassment is directed at non Muslims’.

Cases of discrimination meted out to Kashmiri students by the HoD have also surfaced.

Since February 1, the students of Fine Arts have been protesting against Ahmed accusing him of sexual harassment.

On 7th Feb, there were also complaints raised by protesting students against three male students of Faculty of Fine Arts for harassment. The University administration said “The action has been initiated against them,” adding “Pending the decision of the Disciplinary Committee, they are hereby suspended with immediate effect from the University and debarred from entering the Campus and attending the classes for two weeks.”

University Administration has also assured protesting students that all their demands will be looked into. As per a statement by the University “Selection committee of guest teachers will be held to meet the shortage of teachers in the Department of Applied Arts. Classes in the Department of Applied Arts and other departments of Faculty of Fine Arts are running as usual.”

“University administration spoke to protesting students several times and listened to their grievances and assured all possible efforts for the redressal of their grievances.

The protesting students are being misled by other factions who are not stake holders and backed by certain vested elements who want to destabilise the peaceful academic environment of the university,” reads the statement.

Meanwhile in a shocking statement Jamia Teachers’ Association (JTA) has slammed ‘a one-sided decision’ of the university to send one teacher on leave and suspending three students. “This decision is purely taken in a haste under the pressure of few students who are taking support from outsiders also. University has taken this decision without conducting any inquiry and also without  taking approval from any university body,” reads a statement issued by JTA.