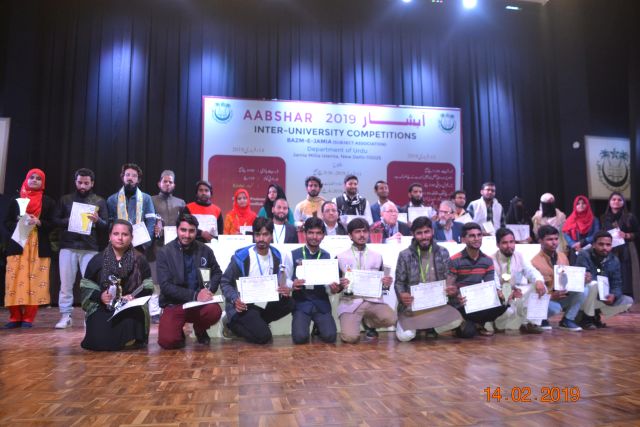 In the event students from various top universities of the country like Delhi University and Jawahar Lal Nehru University participated.

“The event was aimed to recognise and felicitate new talent coming from various universities of the country,” said Amir Muzaffar, Vice President of the Aabshar event whilst speaking to Muslim Mirror. 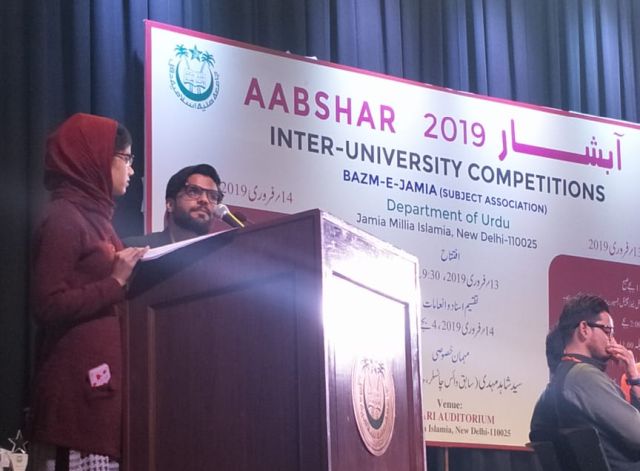 Many Jamia Millia students won the topmost awards in the event. Hasan Akram from AJK MCRC and Danish Rangrez from Education department were declared as best debaters.

The Cheif Guest of the valedictory, Syed Shahid Mehdi congratulated all the winners of the Competition. Shahid Mehdi is a retired IAS officer who had attained 2nd rank in 1963 batch of UPSC. He had also been the VC of Jamia between 2000 to 2004.

With the call of more expansion of Urdu language and literature, the Subject Association of Dept. of Urdu organises inter-university competitions every year.

The programme was designed to inspire Urdu students for the best level of cultural and literary understanding and to enhance their skill in advanced competitive abilities.

Besides, the event made a platform for the students to sharpen and enrich their quality of debate, slogan writing, painting, quiz and Ghazal singing it also provides a magnetic opportunity to the Urdu students to show their knowledge of literature in quiz sessions.

In addition to drama, Pahle Aap directed by Dr. Javed Hasan and drama, Kirdaar directed and produced by Dr. Adnan Bismillah, there were six competitions with the participation of 52 teams from various universities throughout the country. The anchoring of inaugural and closing session was led by the General Secretary, Wasim Ahmad Alimi.

Advisor, Professor Kausar Mazhari and Head of the department, Professor Shahzad Anjum also addressed the closing session on Thursday. The prizes were distributed among the winners with the hand of Chief Guest Shahid Mehdi.