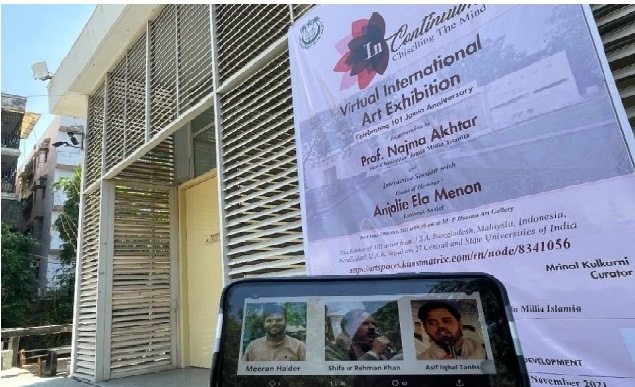 It’s the first year past the centenary celebration at Jamia. As a part of the 101st celebration of its foundation, Jamia held a series of engagement activities, some of which were aimed at commemorating the founding members of this institution and their hard work in establishing a university of this stature.

On the occasion, a virtual exhibition was inaugurated at the M.F Hussain Art gallery, pictures of leaders including Zakir Hussain, Maulana Mohammad Ali Jauhar was put up, building a narrative for the audience to explore and re-live the difficult times during the colonial rule and how these eminent personalities came together, fought for an ideology and built this academic center-Jamia Millia Islamia, against all odds.

However, the campus, the administration continues to ignore and sideline its very own students who actually did imbibe and put the values of the founding fathers into practice, for which many continue to remain behind bars, implicated in cases for taking a stance against the state.

Pre pandemic, the government passes the Citizenship Amendment Act (CAA), which many at Jamia and the entire country felt to be against the core secular values of the constitution. At a time when the parties in opposition chose to conveniently do nothing, the Jamia fraternity emerged as a strong opposition, raising voice against the newly passed legislation. Like-minded students, citizens joined the movement from India and from across the world. All this very much aligned to the core values of the founding fathers (and mothers) of Jamia, whose pictures are put up ornamentally at the art gallery.

The Anti CAA movement witnessed some of the cruellest faces of the state including police brutality captured on camera, Gender-based violence, suppression of dissent.

15th December was one such day when students and the civil society members who wanted to take out a March protesting the bill were clamped down, with the police force entering the Jamia campus, charging on students, destroying the library, built by taxpayers money in an attempt to suppress dissent.

Despite promises being made by the Vice-Chancellor to come strongly against the state for their actions, there was very little done in the court.

When the early February riots took place in northeast Delhi, student leaders that emerged during the movement were the first ones to be taken down with arrests. The Jamia administration did very little for its students, for its alumni.

Meeran Haider, Shifa Ur Rehman and others continue to face charges for close to two years now. It’s ironic for an institution to celebrate its 101st year, praising the leaders that built the university and at the same time being hypocritical, turning an ostrich to its own students who stood the test of time, fighting for the very values these institution makers propagated.

With this scenario at play, I am sure Maulana Mohammad Ali Jauhar must be sad, Zakir Sahab must be upset, Mahatma Gandhi wouldn’t have joined this futile celebration. I join them in expressing my dismay over the year on year hypocritical approach of the administration.

Daud Arif is an AJK-MCRC, Jamia Millia Islamia Alumnus. He currently works on various National as well as International Media and CSR Projects