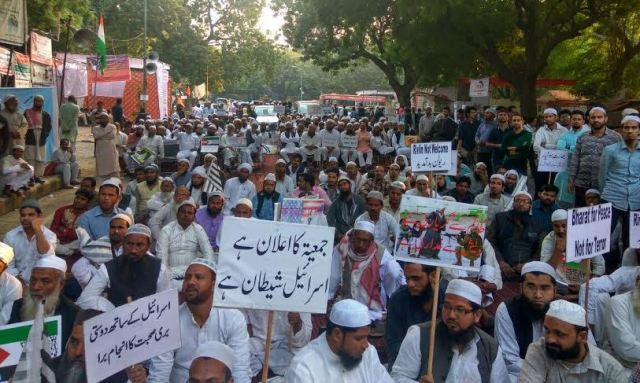 New Delhi:  In order to lodge a protest against the visit of Israeli President Reuven Rivline to India, Jamiat Ulama-i-Hind (M) on Friday organized protest demonstrations at several places in the country. In the national capital also, Jamiat held a rally along with a host of organizations at Jantra Mantra closed to the Parliament House. The protesting leaders condemned the visit of Israeli leader and demanded that the government to review its policy towards the ‘tyrant and expansionist Zionist state’.

Denouncing Israel as a ‘terrorist state’, leaders of different religious and social organizations have said it is the present government led by the right-wing BJP has betrayed its old policy towards Palestine.

Addressing the gathering, JUH President Maulana Usman Mansurpori condemned the Israeli President visit to India adding that it is unfortunate that India has been now hobnobbing with a tyrant state and deviated from the old and established policy of supporting the just struggle of Palestine people. He said there is nothing to celebrate in India’s relationship with Israel as it has been disdainfully disregarding   UN resolutions and killing Palestinian children, men and women in different ways. How a democratic country can welcome such a head of state, he asked.

Former president of All India Muslim Majlis-e-Mushawarat and West Asia expert Dr. Zafrul Islam Khan said it is unfortunate that a terrorist state is being presented a ‘Role Model’ to the countrymen. He said Israel is a state which came into being with the subjugation original inhabitants of Palestine and rooting out them from their land and because of this, the farmers of India had refused to recognize the existence of Israel at the time of its formation, he added. It is an irony that now the very this country is buying arms from Israel on large scale  and expanding cooperation with her  in the fields of agriculture, education and commerce, Dr Khan said.

In his speech, Eng Mohamad Saleem, Secretary General Jamaat-e-Islami Hind pointed that the country has been experiencing   communal tensions and unrest since it established diplomatic ties with Israel in 1992. The first tragedy was Babri Masjid’s demolition by radical Hindus in alleged connivance with the then central government and honorific communal riots in the aftermath as well as the 2002 Gujarat riots, he said.

The government should first ponder over before entering into relationship with Israel that India was also under the occupation of a colonial power, said Naved Hamid, President All India Muslim Majlis-e-Mushawarat.

The leaders alleged that the present government has completely abandoned Palestine and its people because of its ideological leanings.

On the occasion, protesters, most of them came from UP, Orissa, West Bengal and Mewat, raised slogans such as ‘Rivline go back, go back’; ‘Rivline unwelcome to India’; ‘India does not want   friendship with terrorist’; and ‘those support a oppressor is traitor of the country’.  They also held placards denouncing the visit Israeli leader and Israel.

A memorandum also presented to the President Pranab Mukherjee on whose invite the Israeli Head of State is on a 8-day official visit to India. The Isreali leader’s visit is meant to mark the completion 25 year’s diplomatic ties established between the two countries. The diplomatic ties was established during the Congress led Prime Minister Narsimha Rao’s government in 1992, since then it has been grown to unprecedented level that Israel became one largest suppliers of arms to India  .