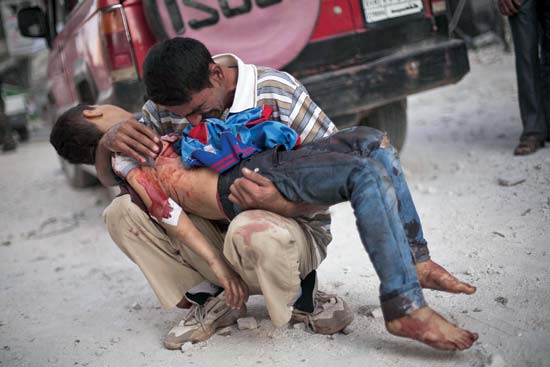 New Delhi: Prominent Indian Muslims organization Jamiat Ulama-i-Hind (M) has urged the UNO to immediately step in for restoring peace in Syria where ‘the Modern day Hitler’ has turned the country into a virtual killing field.

Expressing grave concern over the growing the humanitarian crisis in Syria, former Member Parliament and Jamiat General Secretary Maulana Mahmood Madani said on Thursday said the UN must play proactive role in Syria for stopping the macabre dance of death and destruction unleashed by Bashar al- Assad for remaining in power.

In a letter addressed to the UN Secretary General, António Guterres, he expressed his disappointment over helplessness of United Nation in restoring peace in the war-torn country of the Middle East.

Maulana Madani said that it is a common perception world-over that the world body has totally failed in fulfilling its humanitarian obligations. He said Jamiat Ulama-i-Hind wants to impress upon the members of the UN to take urgent notice of the unfolding humanitarian catastrophe in Syria.

The UN itself estimated that approximately 400,000 people have died in the Syrian conflict to date, , and more than half of the country’s population has been driven from their homes.

The Jamiat letter sent to the UN general secretary also attached its resolution on Syria passed at its 33rd General Session recently.

The resolution reads “This session of Jamiat Ulama-e-Hind feels that the Syrian government is trying to suppress the public anger instead of resolving the issues. The hostile and tyrannical treatment which it has meted out to its people is condemnable. The multipronged war by the world powers has created a situation in Syria which is beyond description. Millions of people have been killed and made homeless there”.

The situation is as grim particularly in Aleppo as   British daily Independent revealed that   Aleppo is experiencing a “descent into hell” amid warnings the city could witness one of the biggest massacres since the Second World War as President Assad’s troops continue their brutal offensive on the city.