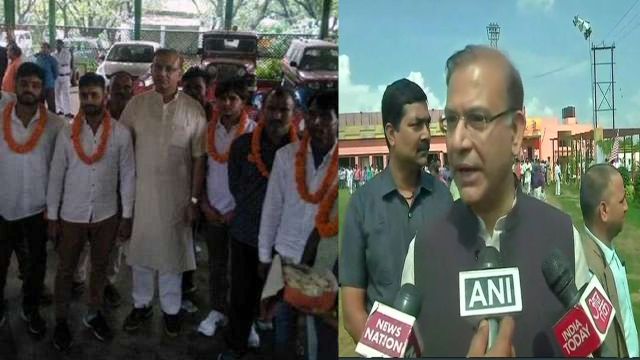 New Delhi : Minister of State for Civil Aviation Jayant Sinha, who has come under sharp attack from the opposition for meeting and garlanding eight convicts of a lynching incident in his Lok Sabha constituency in Jharkhand, on Wednesday expressed regret for his act.

“I have said many times that the matter (of lynching) is still sub judice. It won’t be fair to talk on this. Law will take its own course. We have always worked towards punishing the guilty and sparing the innocent. If by garlanding them (the lynchers) an impression has gone out that I support such vigilantism then I express regret over it,” Jayant Sinha was quoted as saying by news agency ANI here.

The minister, a Harvard alumnus, triggered a major row after he felicitated eight convicts at his residence in Hazaribagh in Jharkhand.

The convicts had been released on bail. Pictures of Jayant Sinha garlanding them were widely shared online, amid a scathing attack by the opposition and his father Yashwant Sinha, a former union minister and ex BJP leader.

The alleged lynchers were convicted of beating to death meat trader Alimuddin Ansari on June 29 last year in the Bazaar Tand area. Ansari was attacked by a mob after he was suspected of carrying beef in his car.

Demanding Jayant Sinha’s resignation, the Congress claimed his action reinforced the belief that the BJP was tacitly supporting those accused and convicted in such crimes.

His father disapproving of his son’s act tweeted to his trolls: “Earlier I was the nalayak baap of a layak beta. Now the roles are reversed. That is Twitter. I do not approve of my son’s action. But I know even this will lead to further abuse. You can never win.”