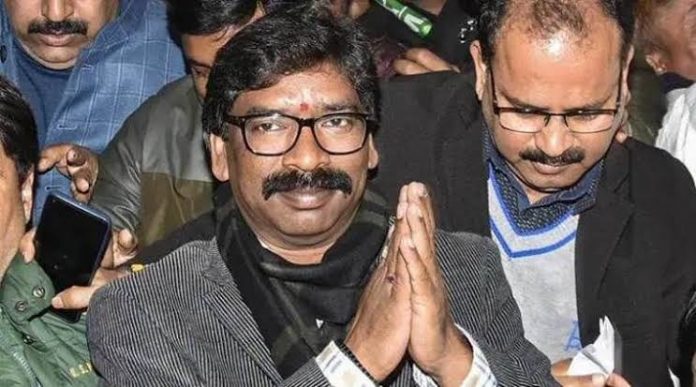 Ranchi, Dec 29 Hemant Soren, who took oath as the 11th Chief Minister of Jharkhand here on Sunday, has succeeded in carrying forward the legacy of his father and Jharkhand Mukti Morcha (JMM) President Shibu Soren.

Hemant Soren”s first public appearances along with his father began in 2004 when Shibu Soren was again confronted with a decade-old arrest warrant in a murder case. Hemant Soren came to his father”s support in this tough situation. Shibu Soren had to resign from the Union Coal Ministry and he was sent to jail. He was later acquitted in the case.

Hemant Soren fought the assembly election from Dumka unsuccessfully in 2005. He was, however, elected from the same constituency in 2009 and later became Deputy Chief Minister in the BJP government led by Arjun Munda in 2010.

Unhappy with the functioning of the Munda government, Soren pulled it down in January 2013. Thereafter, he became the Chief Minister of the state in July 2013 for the first time, following six months of President”s Rule.

Under Hemant Soren”s leadership, the party won 19 seats in the 2014 assembly polls despite fighting the battle alone. The JMM, which was seen as a predominantly rural party, expanded its base by making inroads into tribal and Mahto communities and made its presence felt in the urban areas as well.

JMM”s presence in urban areas can be gauged from the fact that its candidate lost the 2019 assembly polls by just 3,000 votes in Ranchi, which is considered a bastion of the BJP. The JMM candiate got more than 67,000 votes.

The JMM went on to win a record number of 30 seats in the recently concluded polls.

Shibu Soren founded the ”Sonat Santhali Samaj” in 1969, and later with the help of the Shivaji Samaj chief Binod Bihari Mahto founded the Jharkhand Mukti Morcha on February 4, 1973.

Mahto became the President and Sibu Soren the General Secretary of the JMM. The prominent party leaders at that time included the society of industrial and coal labour Secretary A.K. Roy, prominent trade union movement leader late Martin Nirmal Mahto, and the late Tek Lal Mahto among others.

Born on August 10, 1975 in Nemara in Ramgarh district, Hemant Soren is the second of three brothers and has also a sister. As per an affidavit filed with the Election Commission, he was enrolled for the Mechanical Engineering course in BIT Mesra, Ranchi, but failed to complete the course.

He has been vocal in opposing the BJP government led by Raghubar Das on different issues. He was one of the leaders who opposed the amendments brought in 2016 to the two land acts – Chhota Nagpur Tenancy Act and the Santhal Pargana Tenancy Act.

Former Chief Minister Raghubar Das had invited Hemant Soren to the Global Investors Summit in 2017, but he refused to attend, terming it a summit of “land grabbers” and claimed that it is being organised to loot the lands of adivasis and farmers of the state.

Hemant Soren has also shown his political acumen as a tough bargainer who does not shy away from taking a tough stand. He joined the opposition Grand Alliance for the 2019 Lok Sabha polls with the Congress, the JVM-P and the RJD (Rashtriya Janata Dal). As part of the electoral arrangement with the alliance, he surrendered seven seats to the Congress and kept only four for the JMM out of 14 Lok Sabha seats in Jharkhand.

In the latest assembly polls, however, where the JVM-P (Jharkhand Vikas Morcha-Prajatantrik) decided to go alone, Hemant Soren managed to cement the alliance with the Congress and the RJD and secured a full majority.

The JMM, the Congress and the RJD won 30, 16 and one seat, respectively.

Now, the smaller parties, including JVM-P and CPI-ML, have also extended their support to the Hemant Soren government.