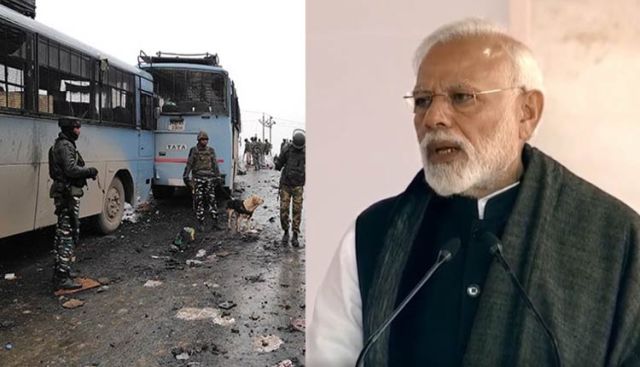 New Delhi : In a stern message to Pakistan, Prime Minister Narendra Modi on Friday said the terrorists have committed their “worst mistake” by killing 45 CRPF troopers in Jammu and Kashmir and said their backers will pay “a very big price”.

Modi’s remarks a day after the Pakistan-backed Jaish-e-Mohammad (JeM) claimed responsibility for the Thursday attack in Pulwama.

“We have given complete freedom to the security forces. We have full faith in their bravery and valour,” Modi said while addressing a programme to flag off the first indigenous engine-less Train 18, renamed as Vande Bharat Express, at the New Delhi Railway Station.

He said: “The terrorist groups and those who are giving them shelter are responsible and have committed their worst mistake. They have to pay a very big price.”

Modi also assured the nation that “those powers who are behind the attack will be punished for their deeds”.

Hitting out at Pakistan but without naming it, Modi said: “If our neighbour which is totally isolated in the world thinks it can destabilize India through its tactics and conspiracies, it is making a huge mistake.”

“If our neighbour which is facing the worst ever economical crisis thinks that it can make India unstable, then their dreams will not be fulfiled.”

The Prime Minister’s remarks came minutes after the Cabinet Committee on Security decided to withdraw the “Most Favoured Nation” (MFN) status given to Pakistan. The MFN status to Pakistan was given by India in 1996.

Modi urged the political parties to stay away from politicizing the issue.

“This moment is very important and emotional. All of us should stay away from politics and we should unite together against them,” he said.

The Prime Minister thanked the countries which have supported India and condemned this incident in the strongest of terms. “A strong reply will be given to this attack,” he said.

“When all the countries will fight together against terror, terrorism will be eliminated. The soldiers have sacrificed their lives for the country. I assure everyone that we will take every step to bring the perpetrators of the crime to book,” he said.

Modi then inspected the engine-less Vande Bharat Express along with Railway Minister Piyush Goyal and flagged it off at 11.20 a.m.

Manufactured by the Integral Coach Factory in Chennai, it left from New Delhi at 10 a.m. for Uttar Pradesh’s Varanasi, the parliamentary constituency of Modi.