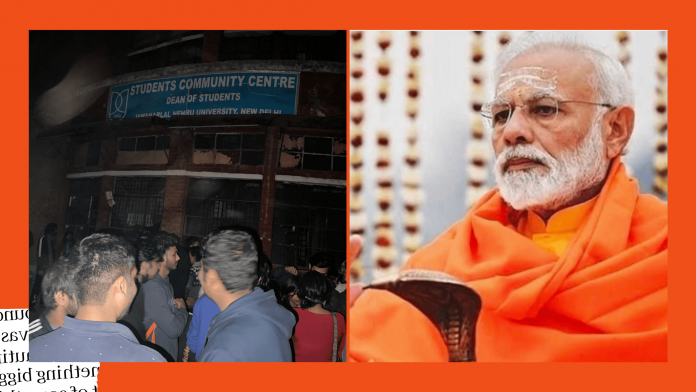 After students who had come to the campus to watch a BBC documentary on Prime Minister Narendra Modi were attacked with stones, high-stakes drama rocked Jawaharlal Nehru University (JNU) on Tuesday night.

According to reports, the Akhil Bharatiya Vidharti Parishad ABVP threw stones at those who were watching it on their phones.

Two students were apprehended by left-wing supporters, who said they were the ones throwing the stones. The two, according to them, are members of the ABVP, the student branch of Rashtriya Swayamsevak Sangh, the BJP’s ideological guru.

My alma mater right now. #JNU , you have my heart! ❤️ The right-wing hooligans belong in jails. #TheModiQuestion pic.twitter.com/fD3tG5cMGT

“To ensure the safety of students we have come towards the main gate. We want urgent restoration of electricity. We will not move from the gate till the time electricity is restored. The police are not responding to our calls,” he added.

The administration was to blame for the blackout, according to Aishe Ghosh, president of the Students’ Federation of India.

“We will watch the documentary with the help of mobile phones using QR codes,” she told reporters.

After the authorities cut electricity on the JNU campus, where the students union were preparing to screen the BBC documentary on Narendra Modi's role in the Gujarat violence, students gather around laptops for the screening. pic.twitter.com/85WIoTpItQ

Following the blackout, the students made their way to a cafeteria on campus, where they used their laptops and smartphones to watch the documentary. According to sources, some stones were hurled at them while they were watching the documentary from behind bushes.

Students protesting the JNU administration marched to the Vasant Kunj Police station later that evening to file a report against the “stone pelters” while chanting “Inqlaab Zindabad” and other anti-administration slogans.

“We filed a complaint, and the police assured us they will be immediately looking into the incident. We gave the name and details of all the persons involved. As of now, we are calling off the protest. We will also file a complaint at the JNU Proctor office,” news agency ANI quoted Aishe Ghosh as saying.

On the power cut at the campus, a JNU administration official, requesting anonymity told PTI, “There is a major (power) line fault at the university. We are looking into it. The engineering department is saying it will be resolved at the earliest.”

The JNU had stated in an advisory on Monday that the students’ union had not obtained its consent for the event and that it should be canceled under threat of severe disciplinary action. The Jawaharlal Nehru University Students’ Union (JNUSU) countered that there was no intention to sow discord of any kind through the documentary or movie’s showing.

The ABVP, on the other hand, has refuted the claim and said that they were not present there.

“We did not go the spot and no one from us (the students’ body) was there. They are just taking our names to get more coverage,” ABVP Delhi media convenor Ambuj told news agency PTI.

On Friday, the government instructed Twitter and YouTube to stop posting links to the documentary. The documentary has been slammed by the Ministry of External Affairs as a “propaganda piece” that lacks objectivity and exhibits a colonial mentality. Nevertheless, the government’s action has been criticized by the opposition.

How can @JNU_official_50 admin do this? #BBCDocumentary on Modi so far has not been officially banned in India, IT Rules have been used to stop on digital platforms. Don’t like it, don’t watch it, how can you stop students? Same rules must apply for #KashmirFiles and @BBC docu https://t.co/IpYAZ89fXZ

(with PTI and ANI inputs)

Peaceful screening of BBC documentary at Jadavpur University in Kolkata