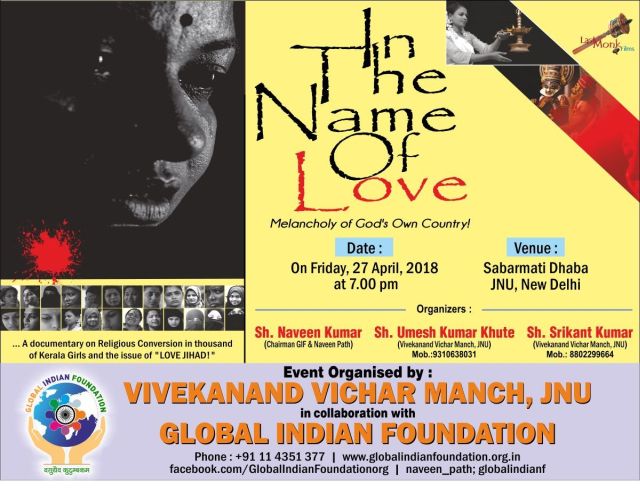 New Delhi : The Jawaharlal Nehru University Students’ Union (JNUSU) on Friday protested against the screening of a documentary based on ‘Love Jihad’ on the campus by another group of students.

The screening of the movie, ‘In the name of love’, was organised on Friday evening by ‘Vivekanand Vichar Manch’, a student group affiliated with the Rashtriya Swayamsevak Sangh.

“We have a political understanding of issue of ‘Love Jihad’. This movie is an agenda to propagate communalisation and we are protesting its screening,” JNUSU Secretary Shubhanshu Singh told IANS.

The organisers said that they had due permission for the screening of the movie and it was anybody’s right to protest.

“The movie is based on the issue of ‘conversion’ in Kerala, of any community whether Hindu or Muslim or Christian, where people are being forcefully converted… JNUSU is protesting against the screening but it is their right to protest,” Srikant Kumar, a member of the organising group, told IANS.

The film, subtitled ‘melancholy of God’s own country’, is directed by Sudipto Sen.