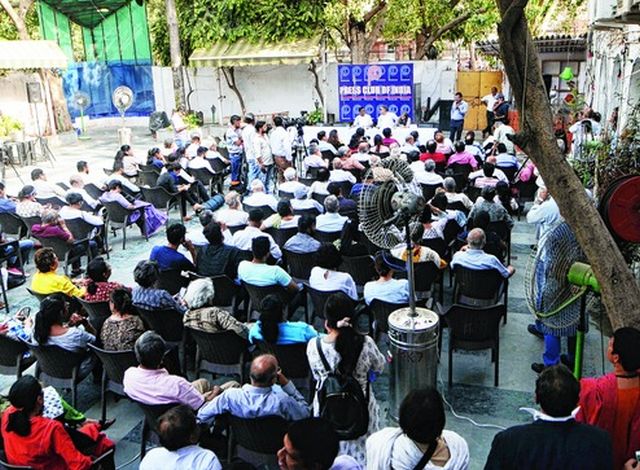 In a joint statement, 11 media organisations demanded that the government of Jammu and Kashmir bring the perpetrators of the dastardly crime to book at the earliest.

“Everyone in this country has this sovereign right to freedom of speech and expression. The increasing intolerance to such freedoms has the potential of undermining the character and nature of democracy itself,” said the statement issued by the Press Club of India, Indian Women’s Press Corps, Press Association, Editors’ Guild, SAFMA and South Asian Women in Media, Indian Journalist Union, Foreign Correspondents Club, National Union of Journalists, Working News Camerapersons Association and All India Urdu Editors Conference.

Bukhari was shot dead by militants outside his office in Srinagar on Thursday. His two security guards were also killed in the incident.

“We demand that the government institute a separate inquiry into those who had launched a malicious campaign against Shujaat. The cyber cell of the Union Home Ministry should look into all those IP addresses and their sources from where the malicious campaigns were conducted,” the statement said.

“We feel that such killings are often preceded by hate messages and malicious campaigns on the social media. Various journalists and other civilians have been viciously trolled and targeted. All such instances ought to be monitored by a vigilant government if civilian safety and security is a priority in governance,” it added.

Speaking on the occasion, senior journalist Siddharth Varadarajan said Bukhari was the 19th journalist who has lost his life in the violence in Kashmir since 1990.

“He had the courage to speak forthrightly. This is the paper that doesn’t print what government of Kashmir wants to print,” he said.

Varadarajan said that long before Bhukari was assassinated, his character was sought to be assassinated by branding him as “a soft separatist, pro-terrorist, pro-Pakistani”.

“You are setting up a target when you vilify somebody like this, which creates a space for hidden forces to engage in this kind of active terrorism” he said.

Bashir Assad, a journalist who had worked with Bhukari, said media organisations should be united to free Kashmir from “current mess and build a peace constituency.”

Journalists said Bukhari was not afraid of taking a stand and was an advocate for dialogue between Indian and Pakistan. They said he tried to bridge the gap between the different communities of the Kashmir Valley.