New Delhi: Kerala journalist Siddique Kappan who was arrested under the Unlawful Activities Prevention Act and sedition by UP Police , is presently “chained like an animal” to a hospital bed in Mathura, a plea on behalf of his wife Raihanth Kappan to Chief Justice of India, NV Ramana has said.

Kappan’s wife urged the court to intervene and release him from the hospital and keep him back in Mathura jail till his plea for release from jail is decided.

“It is most respectfully prayed to take immediate steps/pass necessary orders to release Mr. Siddique Kappan from the Medical college Hospital back to the Mathura Jail as interim relief,” the plea said, as per a Bar & Bench report.

Mathew is the lawyer in the Habeas Corpus petition filed before Supreme Court by Kerala Union of Working Journalists (KUJW) seeking Kappan’s release.

Kappan’s wife stated that after he had suffered a fall in the bathroom and was diagnosed with COVID, he was taken to, KM Medical College, Mathura where he is being ill-treated.

“Presently Mr. Kappan is chained like an animal in a cot of the Medical College Hospital, Mathura, without mobility, and he neither could take food, nor could go to toilet for the last more than 4 days, and is very critical. If immediate corrective steps are not taken, it will result in his untimely death,” the plea said.

It was also pointed out that the Habeas Corpus plea was supposed to be disposed of by the Supreme Court on March 9 but has not yet been listed.

“At a time when the country is gasping for breath, this is an attempt to give interim breath to a journalist, on behalf of the wife Mrs. Raihanth Kappan, to release her husband Mr. Siddique Kappan, who was arrested at Mathura on October 5, 2020 while on the way to Hathras to discharge his duty as a journalist. The writ of Habeas Corpus petition filed on October 6, which was supposed to be disposed on March 9, 2021, is not yet disposed despite listing it for more than seven times,” it was stated.

Earlier, the KUWJ itself had also moved an application for early hearing of the plea citing danger to Kappan’s life. That plea stated that Kappan had collapsed in bathroom at the Mathura jail and later tested positive for COVID-19.

“He is presently hospitalized in KM Medical College, Mathura. It is reliably believed that more than 50 inmates of Mathura Jail are suffering from COVID, with various scarcities, and even drinking water from toilet, seriously affecting hygiene, health, all leading to a major disaster in the making. In short, as on today, the life of Mr. Siddique Kappan is in danger for all reasons,” the plea by KUWJ said.

Kappan, a reporter for Malayalam news portal Azhimukham and secretary of the KUWJ’s Delhi unit, was arrested along with three others in Uttar Pradesh in October while on his way to Hathras to report on the alleged gangrape and murder of a 19-year-old Dalit girl.

They were later booked under provisions of the Unlawful Activities (Prevention) Act (UAPA) and also slapped with charges of sedition.

9 MPs from Kerala appeal for Kaplan

Nine members of parliament from Kerala have issued a joint statement seeking urgent hearing of Kappan’s plea and provide interim relief to the journalist. 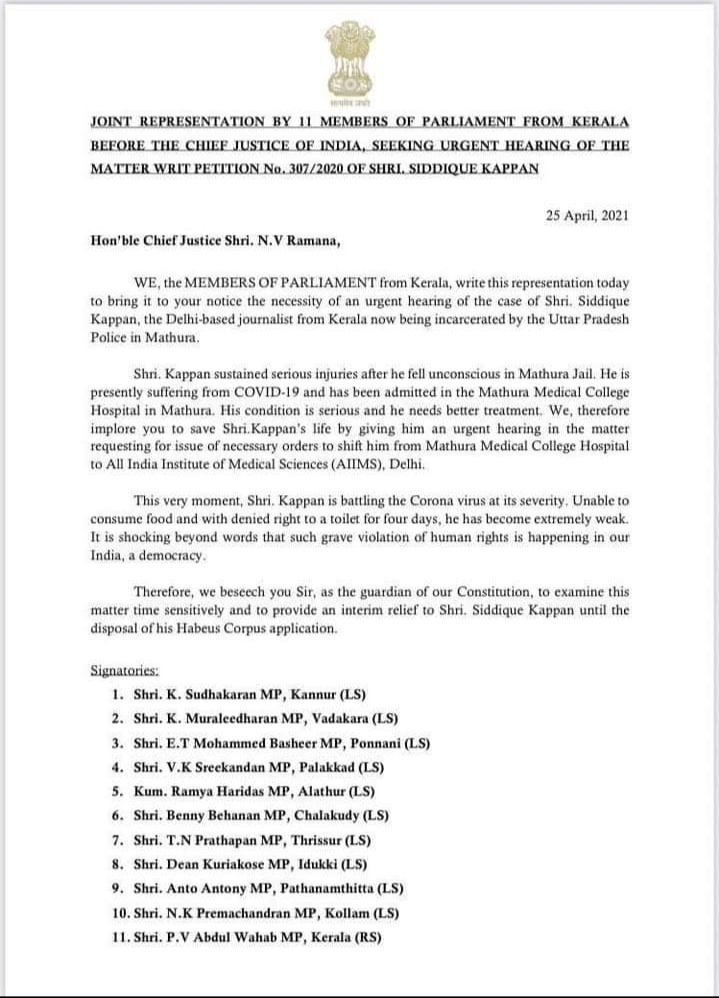