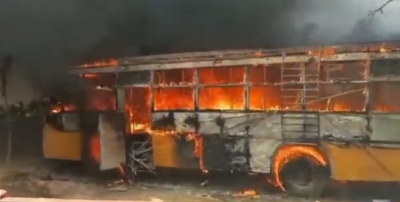 Chennai : Tamil Nadu state intelligence has given inputs to the state police regarding the possibility of clashes between Dalit outfits and the Gounder community in Kallakurichi, in wake of the the suicide by a Class 12 girl student.

Since the July 13 incident, the family of the girl, relatives, and friends were protesting in front of the Sakthi residential school demanding justice for the girl and for another post-mortem examination.

While the protest was by and large peaceful, it took a violent turn on July 17, with the school getting vandalised, school buses and police vans being torched and several two-wheelers in the school building were also destroyed. With police on the scene outnumbered by the protesters, Stone and bottles were pelted at the police injuring IG, M. Pandian, Superintendent of Police, Selvakumar, and several policemen. Forces from adjoining districts had to be brought in for maintaining law and order in the area.

After the end of the violence, an eerie silence is prevailing in Kallakurichi and adjacent Villupuram district where the student’s parents reside.

Dalit outfit VCK is also being responsible for the arson and the school authorities have, according to the intelligence, blamed certain people belonging to the Dalit Adi Dravidar community, for the arson.

While police and the district administration agree to the fact that the attack on the school was pre-planned and well orchestrated, the input on the possible clashes in the districts of Kallakurichi and Villupuram is being seriously taken up by the police authorities.

Talking to IANS, a senior police in Kallakurichi said: “The areas surrounding Kallakurichi and Villupuram districts have a history of clashes on the basis of caste and intelligence inputs will have to be seriously taken into account. Police is keeping a track of all those people who were earlier involved in such clashes.”

Intelligence, according to sources in the department, has directed the schools in and around Kallakurichi and Villupuram not to reprimand Dalit students belonging to the Adi Dravidar community in these districts.

The authorities of Sakthi school that suffered arson and violence have complained that the main culprit behind the attack was still at large and that the person may be indulging in stoking caste feelings leading to the possibilities of further clashes.— IANS