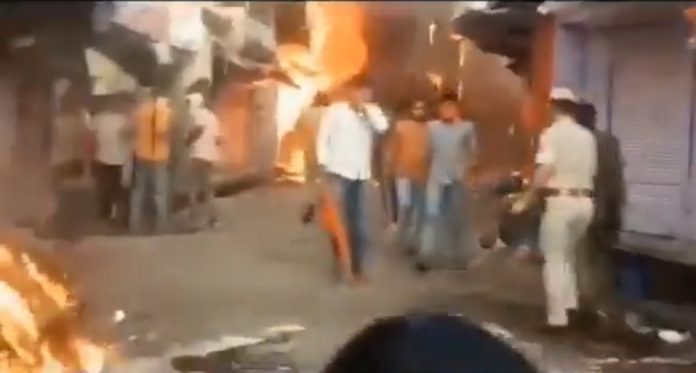 More the 40 houses belonging to Muslim community had been set on fire in less than 24  hours  after the violence broke out in in Rajasthan’s Karauli on Saturday evening.

Curfew remained in force on Sunday after communal clashes had broken out following  a motorcycle rally by Hindu Sena  to celebrate the Hindu new year, leaving around 35 people injured.

During the procession, Hindutva goons riding on bikes shouted anti-Muslim slogans and songs inciting violence against Muslims were played  loudly on speakers when they were psssing through Muslim locality. In one such songs, the extremist singers chant “Topee vaala sar jhukaake Jai Shree raam bolega” (Muslims will bow to Ram and say Jai Shree Ram).

Surpringly the houses belonging to Muslims were set on fire when curfew was imposed .

“Over 40 houses were burnt by right wing Hindus  with the full support of Rajasthan Police on Saturday evening and  two on Sunday noon” Nafees Ahmad  a Youth Congress leader told Muslim Mirror.

‘Local SHO refused the permission of the bike rally to the  Hindu Sena, but  the question is  who gave them permission for the procession? , asked Ahmad.

Obviously the permission was granted by  Collector himself  who gave nod to SDM,  he added.