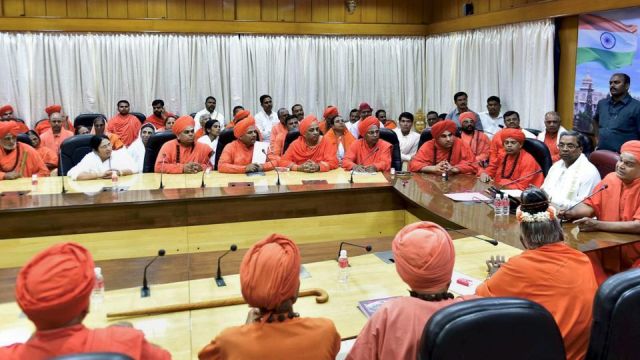 Bengaluru : In a bid to woo the Lingayats, a dominant community in the state, ahead of the assembly elections, the Karnataka cabinet on Monday decided to grant them the status of a separate religion.

“Based on the recommendations of Karnataka State Minorities Commission, the state cabinet has unanimously decided to grant status of religious minority to Lingayats and Veerashaiva Lingayats (believers of 12th century social reformer Basava’s ideologies),” state Law Minister T.B. Jayachandra told the media after the cabinet meeting.

Lingayats, who worship Shiva as the universal god, and Veerashaiva Lingayats, together constitute the largest community (17 per cent) in the southern state, and their votes could influence the outcome of the upcoming state assembly polls in April-May. The BJP is widely seen to have influence in the community which the ruling Congress is seeking to woo.

The BJP, whose Chief Ministerial face B.S. Yeddyurappa is a Lingayat, sees the Congress move as an attempt to divide the Hindu votes.

The state cabinet, chaired by Chief Minister Siddaramaiah, has decided to forward the Commission’s recommendations to the Central government for approval and notification under the National Commission for Minorities Act, the Minister said.

“The minority status has been granted on the Commission’s view that a proper recognition is to be given to the Lingayats and Veerashaiva Lingayats, on condition that the recognition would not affect the rights of other minorities in the state,” Jayachandra said.

A separate committee under the Commission, headed by former Karnataka High Court judge, Justice H.N. Nagamohan Das, had also recommended the grant of religious minority status to the sect.