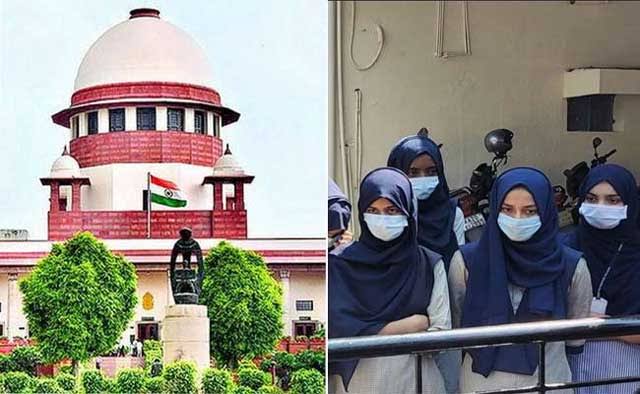 NEW DELHI : The Supreme Court on Monday agreed to examine a plea to constitute a three-judge bench to consider petitions challenging ban on hijab in classrooms of pre university colleges in Karnataka.

She said the matter is urgent in view of the impending examination scheduled in February and added that students have moved to private colleges after the split verdict. Arora further contended that the examinations can only be conducted in government colleges, therefore students may be permitted to appear in the exams wearing hijab.

The bench comprising Justices V. Ramasubramanian and J.B. Pardiwala also, asked the counsel to mention before the registrar. The counsel submitted that the matter may be taken up for interim order.

The bench said, “This is a three-judge matter. We will do it.”

The Supreme Court, in October last year, gave a split verdict on petitions challenging the validity of ban on hijab worn by some Muslim girl students in classrooms of pre university colleges in Karnataka. The split verdict was delivered by a bench comprising Justices Hemant Gupta and Sudhanshu Dhulia.

Justice Dhulia, in his judgment, said: “We live in a democracy and under the rule of law, and the laws which govern us must pass muster the Constitution of India. Amongst many facets of our Constitution, one is Trust. Our Constitution is also a document of Trust. It is the trust the minorities have reposed upon the majority.”

The bench had said since there is divergence of views, the matter would be posted before the Chief Justice of India for setting up a larger bench. — IANS